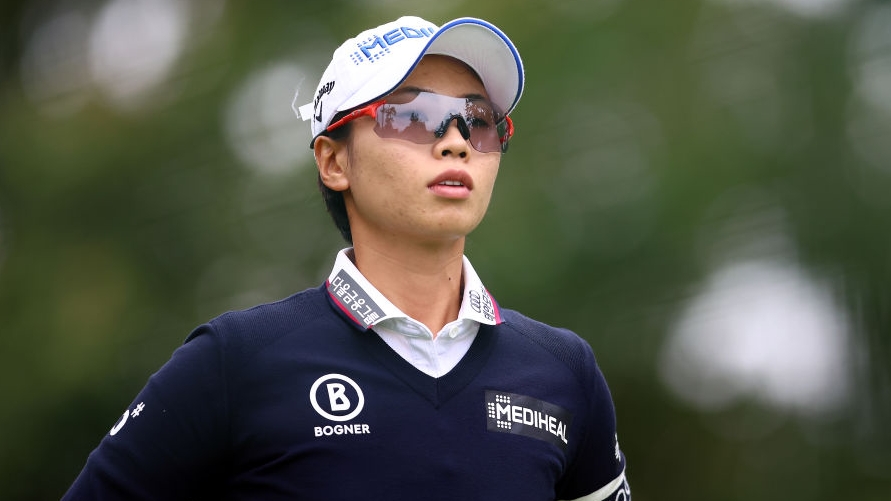 OTTAWA, CANADA - AUGUST 26: Narin An of South Korea walks down the 11th fairway during the second round of the CP Women's Open at Ottawa Hunt and Golf Club on August 26, 2022 in Ottawa, Ontario, Canada. (Photo by Vaughn Ridley/Getty Images)
John Chidley-Hill/ Canadian Press

OTTAWA – LPGA Tour rookie Narin An hasn’t won in North America yet but she’s put herself in a good position to at the CP Women’s Open.

An shot a 6-under 65 on Friday to take a two-stroke lead, 13 under overall, at the Canadian women’s golf championship. The 26-year-old from South Korea’s lead was safe as second-round play was suspended due to darkness.

“I don’t have experience winning in the U.S., but I do have some experience in Korea, so it’s not an unfamiliar feeling right now,” said An of her lead. “I hope to put up good results the next two days just like I did yesterday and today.”

An has played most of her golf on the LPGA of Korea Tour until this season. She believes her experience on that tour will translate well to this continent.

“I don’t think there’s that big a difference between Canada, the U.S., and Korea,” she said. “There’s different environments here, so I need more time to adjust to each one.”

Fellow Korean Hye-Jin Choi (63) sat in a tie for second with American Nelly Korda (64) and first-round leader Paula Reto (69) of South Africa at 11 under overall. Sarah Schmetzel (64) of the United States and Japan’s Nasa Hataoka (67) were tied for fifth at 9 under.

Reto had rocketed up the leaderboard on Thursday when she fired a course-record 9-under 62. She said her putting wasn’t as sharp in the second round, which is why the lead slipped away from her.

“My speed on the greens was a little bit off. I was ramming the putts by, so my lines and speed didn’t match, so I just didn’t make any putts,” said Reto. “I had a couple close looks but they didn’t go in because of that.”

Play was suspended for two hours due to heavy rain and lightning around Ottawa Hunt and Golf Club on Friday morning. That delayed the tee times for the afternoon wave, with many of them having to finish their second rounds early Saturday morning.

“I thought rain would continue to come and I’m glad it didn’t,” said An. “I definitely had to focus more in the event that it would rain again.”

Maddie Szeryk (68) of London, Ont., finished her round just before darkness fell on the course. She had her second consecutive bogey-free day to sit in a tie for 13th at 7 under and was the low Canadian after two rounds.

“I don’t think I’ve ever done that before,” said Szeryk of the two mistake-free rounds. “I just played really solid. I hit a bunch of greens and putted it OK.

“I hit it well, so I wasn’t ever really in a lot of trouble. It’s pretty cool. I definitely don’t think I’ve done that before.”

Brooke Henderson, from nearby Smiths Falls, Ont., shot a 3-under 68 to sit at 5 under in a tie for 32nd. The horn sounded to suspend play due to the weather just as she putted for birdie on her second hole. As the horn echoed around the course her putt dropped in the cup.

“I hit it and I was startled because I heard the sound, so it was nice to see it go in,” said Henderson. “My brother-in-law was calling me Michael Jordan for the buzzer beater.”

Amateur Lauren Zaretsky (71) of Thornhill, Ont., and Hamilton’s Alena Sharp (72) also made the cut. They were tied for 57th at 3 under when play was called.

Toronto’s Rebecca Lee-Bentham was through 15 holes when the horn sounded and sat at 4 under. She will resume her second round early Saturday morning, looking to stay below the 2 under cutline.

Canadian Golf Hall of Fame member Lorie Kane of Charlottetown played her 30th and final round at the CP Women’s Open. She missed the cut.