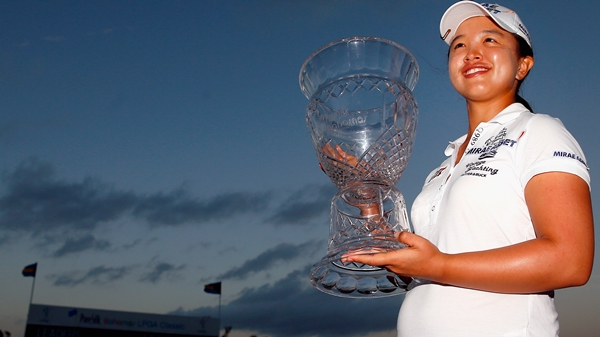 “Just before the last putt I was super nervous, but I was fine,” Kim said.

The 22-year-old Kim shot a 1-under 72 in the completion of the delayed third round and closed with a 68 to match Yoo and Jutanugarn at 14-under 278 on Atlantis Resort’s Ocean Club course.

Kim birdied the par-5 18th in regulation, chipping from the front greenside rough to 3 feet – to earn the last spot in the playoff. She won on the hole a few minutes later.

A five-time winner on the Korea LPGA, Kim tied for sixth at the LPGA Tour’s Q-school to earn a card. She played in four playoffs on the KLPGA, winning four of them.

“I joined the LPGA in hopes of making the Korean Olympics team,” Kim said. “This is one step toward that. So, this means a lot to me.”

She’s projected to move from No. 40 to No. 23 in the world. Q Baek is currently the fourth and final South Korean player in the Olympic rankings at No. 11.

Brittany Lincicome was third at 13 under after rounds of 68 and 70.

Second-ranked Inbee Park had a chance to take the top spot back from Ko, but closed with a 72 to tie for fifth at 12 under.

“I saw the news or like the projections and how it would change, but I didn’t really think about it,” Ko said. “To me, it was more important trying to make a lot of good putts and a lot of good birdies.”

Play was delayed Thursday because of rain and slowed Friday by high wind.