Spectators, reptiles and rules! Oh my! 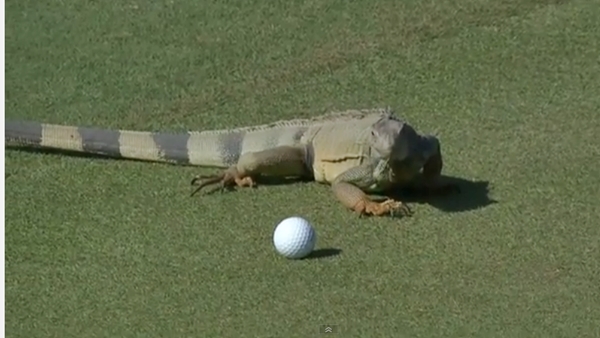 The Rules of Golf provide a unique standard to which the game is played at all levels – whether on a Sunday morning at your local club, in a provincial or national amateur championship, or even at the highest professional level.

Unlike manipulation of rules in other sports where there are variables in how the game is played at different levels, the Rules of Golf are able to cover circumstances at all levels… And, the Decisions Book has the lengthy content to prove it!

With the magnitude of a full-scale professional championship, that includes grandstands, thousands of spectators and more, the Rules of Golf need to be prepared for any number of circumstances that occur.  An example of the all-encompassing nature of the Rules of Golf was evident this weekend at both the WGC-Cadillac Championship and the Puerto Rico Open.

This weekend a passing spectator at the WGC-Cadillac Championship moved Luke Donald’s ball. In addition, a local iguana at the Puerto Rico Open mobilized Andrew Loupe’s ball. You can watch both of the videos below:

In both cases, the spectator and the iguana meet the definition of an Outside Agency:

In match play, an “outside agency” is any agency other than either the player’s or opponent’s side, any caddie of either side, any ball played by either side at the hole being played or any equipment of either side.

In stroke play, an outside agency is any agency other than the competitor’s side, any caddie of the side, any ball played by the side at the hole being played or any equipment of the side.

In both situations, Rule 18-1 (Ball at Rest Moved; By Outside Agency), applies.  Rule 18-1 provides the following guidance when a ball at rest has been moved by an outside agency (spectator, volunteer, reptile, etc.).

If a ball at rest is moved by an outside agency, there is no penalty and the ball must be replaced.

It is important to note when applying Rule 18-1 that it is a question of fact whether a ball has been moved by an outside agency. In order to apply this Rule, it must be known or virtually certain that an outside agency has moved the ball. In the absence of such knowledge or certainty, the player must play the ball as it lies or, if the ball is not found, proceed under Rule 27-1.

Fortunately, with extensive television coverage provided by the PGA Tour, spectator testimony, etc., both Donald and Loupe were able to replace the ball to its original location.