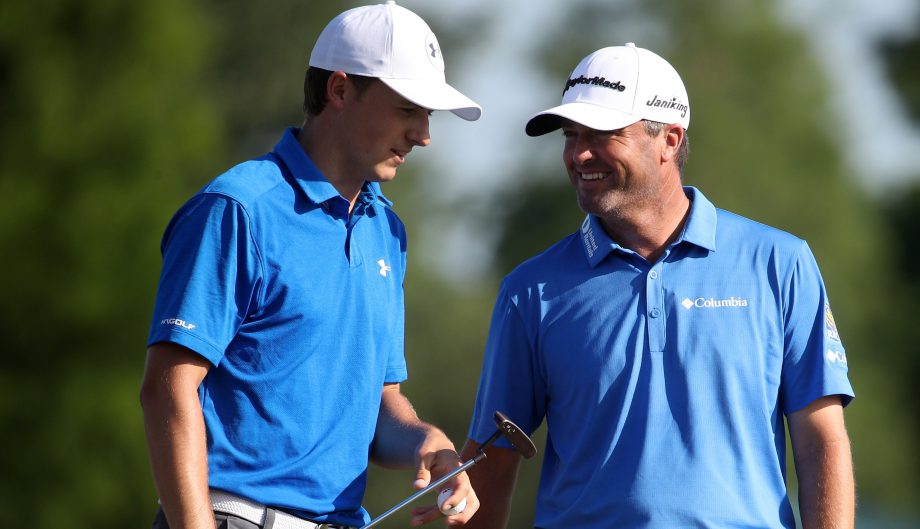 AVONDALE, La. – Jordan Spieth showed off his stellar short game. Ryan Palmer contributed momentum-saving par putts. They turned out to be quite the team Thursday in the Zurich Classic, the first official team event on the PGA Tour in 36 years.

Spieth hit a bump-and-run from 100 feet to a front pin to set up birdie on the par-5 11th, chipped in for birdie on the 14th and closed out their foursomes round with a 15-foot birdie for a 6-under 66 to share the lead with 18-year-old Ryan Ruffels and Kyle Stanley.

Nick Watney made a 60-foot eagle putt from well off the green at the par-5 18th as he and Charley Hoffman were among four teams at 67.

Even in the tough alternate-shot format, benign conditions at the TPC Louisiana allowed for good scoring with 43 of the 80 teams breaking par, and 18 teams in the 60s.

“Alternate-shot format with these conditions, anything 3 under or so was a solid score,” Spieth said. “Grab a few extra and be in pole position , it’s fantastic. We’re just going to try and have as much fun as we had today.”

The partnership of Spieth and Palmer, close friends who live in Dallas, took root late last year when Palmer’s caddie, James Edmondson, said they would have to play together if Edmondson beat Spieth in a friendly match. He got Spieth on the last hole, and Spieth decided to add the Zurich Classic to his schedule.

Spieth said his partner didn’t miss a shot over the first 10 holes, and Palmer pitched in with key putts. They hit only two of the last seven greens in regulation and still played that stretch in 3 under par.

“It’s great watching his short game,” Palmer said. “It’s one of the best in the world. And when the putter is rolling, it makes it not has hard to make those 5-footers. We both had our fair share, and we poured them in.”

Ruffels, who turns 19 on Saturday, was an amateur in Australia when he played with Stanley at the Australian Masters. They got along well, are now represented by the same management firm and decided to play together in New Orleans.

Ruffels had never played foursomes until nine holes of practice on Tuesday, but it sure didn’t show. Starting on the back nine, they began the round with four straight birdies, with Stanley making three of those putts.

“We both keep it in play, and we both hit it quite long, and we gave ourselves a lot of opportunities,” Ruffels said. “So all it took was someone to start rolling a few putts in, like we both did.”

Some teams getting most of the attention didn’t fare too well.

Justin Rose and Henrik Stenson, the gold and silver medallists at the Olympics last summer in Rio, played the par 5s in 2 over and opened with a 72. Jason Day and Rickie Fowler, who have a corporate relationship with Zurich, could only manage a 71.

The cut will be made after Friday fourballs to the top 35 teams and ties. The winners will each get credit for a PGA Tour victory, just as it was in 1981 at the Walt Disney World National Team Championship in 1981, the most recent official team event.

Brian Stuard, who won the Zurich Classic last year on his own, has Chris Stroud as a teammate. They had a chance to tie for the lead on their final hole, the par-3 ninth, until Stuard hit into the water. He made a 20-foot putt to at least escape with bogey and a 68.

Also at 68 were Steve Stricker and Jerry Kelly, a pair of 50-year-olds from Wisconsin who still have full PGA Tour status. They also had a chance to join the leaders until Kelly missed a 3-foot par putt on the 17th.

Brooks Koepka and his younger brother, Chase, who received a sponsor exemption, were among those at 69.

Spieth headed to the practice range after the round, and then the two-time major champion and Palmer had plans Thursday night. New Orleans coach Sean Payton invited them to the Saints’ team room for the NFL draft.

Both are Cowboys fans, but Palmer is friends with the coach and played the pro-am with Payton and quarterback Drew Brees.

“It’ll be really cool just kind of sitting in the back and watching that process take shape,” Spieth said. “I’ve always wondered what it’s like.”