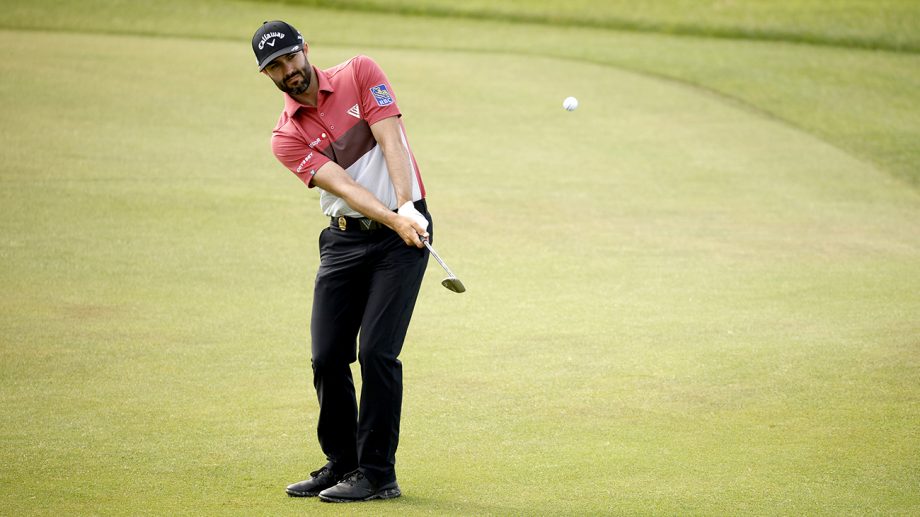 KIAWAH ISLAND, SOUTH CAROLINA - MAY 23: Adam Hadwin of Canada chips on the sixth green during the final round of the 2021 PGA Championship held at the Ocean Course of Kiawah Island Golf Resort on May 23, 2021 in Kiawah Island, South Carolina. (Photo by Cliff Hawkins/Getty Images)
Associated Press

FORT WORTH, Texas (AP) – Phil Mickelson kept hearing congratulatory words as he made his way around Colonial, and there was a huge roar from the crowd when the PGA Championship winner made a long putt to finish his round. Jordan Spieth kept making birdies in the same group.

Spieth shot a 7-under 63 on a breezy Thursday and was tied for the first-round lead at the Charles Schwab Challenge with Sergio Garcia, who had a 15-foot birdie attempt on the 18th hole that circled the edge of the cup but didn’t go in. Both former Colonial champions had bogey-free rounds.

The 50-year-old Mickelson, only four days after becoming the oldest winner of a golf major, was 10 strokes back after a 73 that ended with the 22-foot birdie while playing with local favorite Spieth and defending Colonial champion Daniel Berger (68).

Garcia matched the closing 63 he had at Colonial when he got the first of his 11 PGA Tour wins 20 years ago at age 21. He was 5 under on the four-hole stretch right in the middle of the round. He birdied holes No. 8-10 before an eagle at the 620-yard 11th, where he blasted out of a greenside bunker on the course’s longest hole.

“It was quite breezy. It was gusty, so it wasn’t easy to pull some of the clubs,” Garcia said. “There were some tough holes out there, but I was able to hit really good shots on those holes, and a couple up-and-downs when I needed them.”

Right after Mickelson’s final putt at the 387-yard ninth, Spieth had a tap-in for his third birdie in a row, and seventh overall – and right after a 71-foot chip-in from the rough at the par-3 eighth. The 2016 winner and two-time runner-up had his best score in 33 career rounds at Colonial, one of two local events for the Dallas native, after rolling in a 12-foot birdie putt to start the day.

“It’s hard to go any lower,” Spieth said. “That’s what I talked about before the tournament. If I could get a couple to go in early in the first round, and the confidence, and the work I’ve been doing on my stroke the last few days … I thought that would exude just a little bit of confidence into the rest of the round on greens where I’ve been very successful on before.”

Erik Compton, the two-time heart transplant recipient who got into the field on a sponsor exemption, and Jason Kokrak had 65s. The 41-year-old Compton played bogey-free after birdies on the first two holes of his second PGA Tour start this year. He missed the cut at the Honda Classic.

Mickelson, the 2000 and 2008 Colonial champ, missed nine of 14 fairways – some with irons off the tee – in a scrambling early-starting round that followed an emotionally draining few days.

After winning Sunday at Kiawah Island in South Carolina, Mickelson flew home that night to California, then allowed himself a couple of days to relish his historic accomplishment. Lefty said he never considered skipping Hogan’s Alley, a tree-lined course he considers perfectly suited for his game because he doesn’t have to keep hitting drivers.

But the rough is thick after a lot of rain recently, and there is a good chance of more Friday.

Mickelson, playing his last tournament before the hometown U.S. Open at Torrey Pines next month, went into the rough on his first swing of the day. While saving par at the 407-yard 10th, he quickly had the first of his five bogeys at No. 11, where he hit two shots into the rough and another into a greenside bunker. He finally made a birdie at the par-3 16th from inside of 5 feet, then immediately gave that stroke back at No. 17 with the first two shots into the rough before a 44-foot shot into a bunker.

“It was almost like I was trying a little too hard, and I wasn’t just calm and let it happen, and I was a little bit antsy,” Mickelson said, then adding the term unsettled. “Like I just couldn’t quite get calmed down in that same frame of mind.”

Mickelson said the course was very playable, even with the 15-20 mph winds, because of receptive greens. But he couldn’t keep the ball in the fairway.

“You can’t play this course out of the rough because then you have tree trouble, which I had repeatedly, and I didn’t putt well,” he said. “But I won the PGA, so I’ll see if I can get it turned around for tomorrow and get a little better focus, a little better energy.”