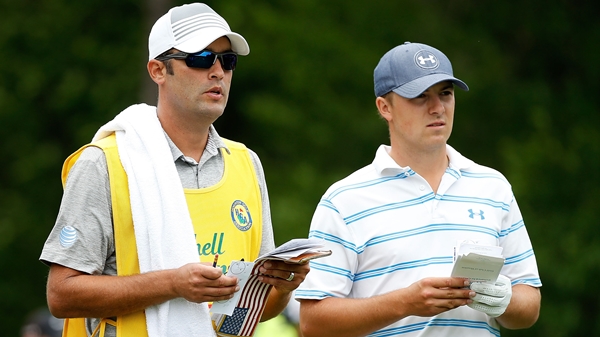 HOUSTON – Jordan Spieth’s pre-Masters run of extraordinary golf continued Saturday as the 21-year-old Texas native shot a 5-under-par 67 to take a one-shot lead over three players through 54 holes of the Houston Open.

A victory Sunday would be Spieth’s third on the PGA Tour and make him the second youngest after Tiger Woods with three titles since 1940. It would also allow him to wrest the lead in the point standings away from Jimmy Walker and further boost his confidence ahead of the season’s first major championship in Augusta, Georgia, next week. Spieth was the runner-up to Bubba Watson there last spring.

Spieth sank a 41-foot birdie putt from just off the green on the par-3 16, to get to 14 under par, where he finished.

His last two previous starts – winning a playoff in Tampa over Patrick Reed and placing second to Walker in San Antonio – lifted him to a career-best No. 4 in the World Golf Rankings.

“Today was as comfortable as I’ve ever been with the lead on a weekend,” Spieth said. “I wanted to get into contention as much as I could prior to the Masters, to have as much experience as I could to limit those nerves. This feels really good. (Sunday) I’ll certainly have nerves, but hopefully I’ll give myself a chance to win. Then I’ll take even more confidence into next week.

“Anytime you can close out a tournament it’s going to be good for you the next time you tee up,” he said.

Austin Cook, who gained entry into the field through the Monday qualifier, is tied for second at 203 with first-round leader Scott Piercy and Johnson Wagner, the Houston Open’s 2008 champion.

Cook, who’s only 24 and still seeking his PGA Tour card, finished Friday’s second round with four consecutive birdies to catch Phil Mickelson for second place, then briefly claimed the lead with a birdie on the eighth hole Saturday.

Cook had an up-and-down back nine, suffering a double bogey on the par-5 15th before reclaiming a stroke with a birdie on 17. He sank a short putt on 18 to stay within a swing of Spieth as he tries to become only the third qualifier since 1986 to claim a Tour championship.

Piercy had tied the tournament-course record with an opening 63 but skied to 74 on Friday, only to bounce back strongly with a third-round 66. Wagner posted a 67 to fight his way into contention.

Andrew Putnam, the 36-hole leader, struggled to a 75 and fell five shots off the surging Spieth’s pace.

Mickelson, the 2011 Houston Open champion, had left the course as the leader Friday before Putnam overtook him. He birdied his first hole Saturday before slowly coming apart – a double-bogey on the par-4 fifth hole and bogeys on the last three holes for a 75, now 6 strokes back.

“I didn’t play very well today,” the 44-year-old Mickelson said, admitting he would have “been in striking distance” if not for his dreadful finish. “The last three bogeys hurt. I fought hard all day without really playing well to keep it an even par, but the last three (holes) got me.”

Spieth has had four top-10 finishes in five starts since missing the cut at Torrey Pines in early February but said he didn’t think he was on “a run.”

“Honestly, I look at this as the way I should be playing,” he said. “If I look at it as a run, it means the normal me is something less. I can’t think of myself that way.”

Spieth won his first tour title in the John Deere Classic in July 2013, before he turned 20, and was the PGA Tour’s Rookie of the Year that season.