Spieth in contention after rain alters course at Nelson 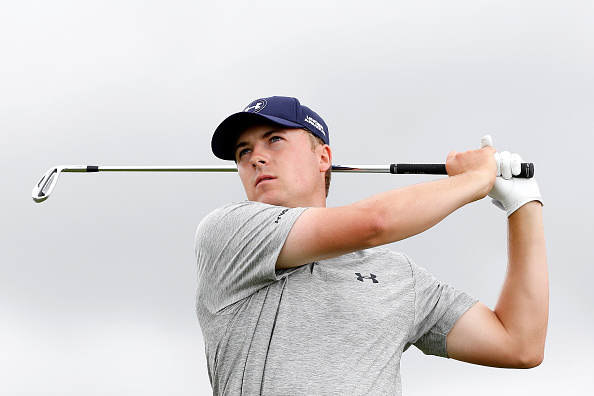 IRVING, Texas – Jordan Spieth wasn’t sure what par was at his hometown AT&T Byron Nelson and thinks it actually might have helped him through some frustrating early holes.

There’s a reason the Masters champion was uncertain – overnight rain turned one of the signature par 4s at the saturated TPC Four Seasons into a pitch-and-putt par 3 at 105 yards for the second round Friday.

Spieth and every other early finisher within three shots of clubhouse leader Jon Curran turned in a birdie 2, and Gary Woodland had a hole-in-one when it was still possible that the easy wedge over a pond would play as a par 4. Tour officials later made the switch.

“I was able to fire at more pins, not really worry about anybody else,” said Spieth, who shot 64 – 5 under because par became 69 to put him at 6 under for the tournament. “Really actually helped because I didn’t know what score I was at when it’s a par 4, 4 par, par 3, don’t really know what it’s at.”

Curran shot 63 and was at 9-under 130 with the two-round par total at 139 instead of 140, with several contenders unlikely to finish the round because of a three-hour delay at the start. Cameron Percy was a shot back after an eagle at the par-5 seventh for a 64.

Defending champion Brendon Todd shot 68 and was 1 over for the tournament, unlikely to make the cut.

The fairway at the normally 406-yard 14th was deemed unplayable in the landing area after 5 inches of rain fell starting about midnight, pushing the total to about 17 inches in less than three weeks at the Four Seasons course. Texas officials have declared May the wettest month in the state’s history.

Muddy footprints marked the area where a dip in the fairway funneled down to a rain-swollen canal off to the right. Standing water covered the ground under some trees, about the same spot where Spieth chipped out in Thursday’s first round and ended up with a bogey.

The temporary tee box was on the fairway side of a pond that wraps around the left side of the green. Tour officials believe it was the first such alteration since the 2005 WGC-Match Play Championship, when flooding at La Costa in Carlsbad, California, temporarily turned a 467-yard par 4 into a 162-yard par 3.

“It was really tricky,” said the 21-year-old Spieth, who birdied his final three holes at Nos. 7-9. “We get up there and it’s 105 yards, but it’s off a steep upslope and really muddy. I don’t think we’ll see that, if ever, again, something like that.”

Curran, a 28-year-old rookie looking for his first PGA Tour win, shot 29 starting on the back nine, with the same boost as others on the 300-yard head start at 14. He had bogeys on the first and sixth holes to prevent a serious run at a 59 – with an asterisk of course.

“I knew it was a 105-yard hole,” Curran said. “I don’t think anybody really knew what all was going on. I think it was good that they gave us a chance to get out there and play.”

There’s another strong change of overnight storms into Saturday, but the forecast improves considerably later in the day and into Sunday. Workers spent about six hours getting the course ready starting around 4 Friday morning and might have to do it again.

“They’ve probably not really enjoyed each night for the last month or two months,” said Spieth, who finished 16th in his first pro tournament as a 16-year-old amateur at the Nelson five years ago. “But hats off to them and hopefully they can catch a break now.”

And the players can know what par is.

Graham DeLaet was able to get through his first 36 holes. The Weyburn, Sask., native sat tied for 27th at 4-under as of Friday night.

Team Canada’s Austin Connelly was 2-under with five holes left in his second round, while Adam Hadwin was sitting on the cut line with at 1 under with three holes remaining in his opening two rounds.