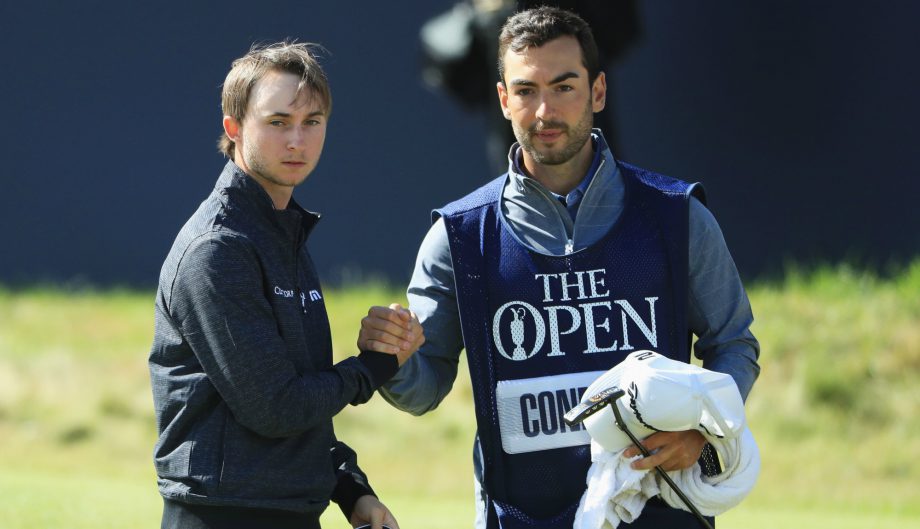 Two great bunker shots by Jordan Spieth and Brooks Koepka – one for par, one for eagle – led to a 5-under 65 for each of them in the opening round of the British Open.

Koepka, with no competition and very little golf since winning the U.S. Open last month, was in a pot bunker short of the green on the par-5 17th when he blasted out and watched it roll into the cup for an eagle that allowed him to share the lead with Spieth among the early starters Thursday at Royal Birkdale.

Spieth had a bogey-free round, and it required great bunker shots even by his standards to keep it that way.

Great work! @bkoepka holes a bunker shot to move in to a share of the lead. #TheOpen pic.twitter.com/cv8UGVpRFD

His shot out of the rough barely rolled into a pot bunker to the right of the 16th green, leaving the ball on a slight slope near the back edge.

“This is dangerous,” he said to his caddie.

He aimed to the right of the hole to avoid it going off the green on the other side and into another bunker, and it came off perfectly about 10 feet away.

“That was awesome,” were his next words to his caddie.

He made the par putt – Spieth made a lot of putts on Thursday – picked up a two-putt birdie on the 17th and narrowly missed a 7-foot birdie putt on the last. It was Spieth’s best start in a major since he opened with a 66 at the Masters a year ago.

“I couldn’t have done much better today,” he said.

Austin Connelly was the top Canadian after Thursday’s play, sitting just two strokes back of the leaders with an opening round of 3 under. Adam Hadwin of Abbotsford, B.C., opened at 1 over.

The Challenge Tour's own Austin Connelly is 4 under par and just one off the lead at #TheOpen ? pic.twitter.com/DpUFR08Fyb

Royal Birkdale was much more kind than it was nine years ago in raging wind and rain. The 146th Open began in cool temperatures, a light rain and a strong wind. Mark O’Meara, a winner at Royal Birkdale in 1998 who is playing in his last British Open, hit the opening tee shot.

And then he hit another one.

O’Meara’s first shot was lost in the gorse, he made a quadruple-bogey 8 and was on his way to an 81. But it wasn’t long before the wind off the Irish Sea pushed along the rain clouds and led to sunshine in the afternoon.

The wind remained strong. The scores were largely good.

Koepka and Spieth led the way, with Ian Poulter, Justin Thomas and Richard Bland in at 67. It was a businesslike day in more ways than one for Thomas, who wore a tie loosely draped around his neck and a cardigan sweater. He wasn’t all about making a fashion statement. Thomas, who shot a 63 in the third round of the U.S. Open, made eagle on the 17th hole to hang around the early leaders.

Solid start to @TheOpen. @RoyalBirkdale_ was great this morning. The sun has come out and it's the calm before tomorrow's storm ?☔️? pic.twitter.com/viPmyM4cVc

Hideki Matsuyama was among those at 68.

Koepka didn’t seem to miss a beat from his four-shot victory at Erin Hills, even if he barely touched a club. He stuck to a planned trip to Las Vegas after winning his first major, and he spent two weeks out West. When he finally got back to Florida, he played golf only one time, with manager Blake Smith at Hambric Sports, and lost to him (though he gave him 13 shots).

Koepka considers himself the consummate gamer, though. He was itching to get back to competition, and after arriving last weekend at Royal Birkdale to learn the course, he proved to be a quick study.

“It feels back in the routine now,” Koepka said.

Whether he and Spieth had the lead depended on the late starts, particularly Matt Kuchar, who made the turn at 5-under 29.

Kuchar was the U.S. Amateur champion when he played Royal Birkdale in 1998, still not even sure he was going to turn pro. Now he’s on the short list of best players to have never won a major. And the way the majors have gone the last few years, maybe this is his time. Koepka was the seventh straight first-time winner of a major.