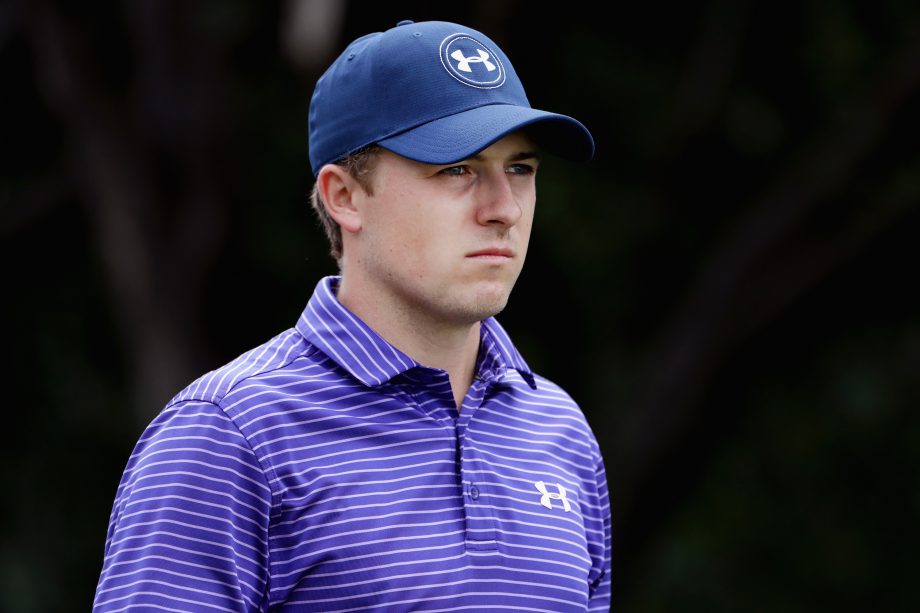 IRVING, Texas — Jordan Spieth covered his mouth in disbelief on the 16th green when his long eagle putt stopped short of falling in for a share of the lead. His group then rushed to complete the final two holes before dark.

Spieth finished with consecutive pars for a 6-under 64 on Thursday and was within a stroke of the lead when the first round of the AT&T Byron Nelson was suspended because of darkness.

The world’s No. 2-ranked player and Dallas native, whose first PGA Tour event was the Nelson as a 16-year-old amateur six years ago, is playing only his second tournament since squandering a five-stroke lead on the back nine at the Masters. He missed the cut last week at The Players Championship, but had only one three-putt to start at rain-softened TPC Four Seasons.

“This week felt a bit different than the past couple years as a professional. I don’t know what it is,” Spieth said. “I came out and maybe kind of the bad weather has kind of softened the crowds and hasn’t felt the same. … Everything has been a bit more calm this week and it’s been a lot easier to just stay in a normal rhythm.”

Sergio Garcia, Danny Lee and Johnson Wagner shared the lead at 7-under 63. Garcia played in the morning, and Lee and Wagner, like Spieth, were just able to complete the round that started 2 1/2 hours late after early morning rain.

Tom Hoge, one of 30 players who have to finish their first rounds Friday morning, was 6 under through 14 holes. His only bogey was after he missed the green and then two-putted from 10 feet at the par-3 fifth, the last hole he completed. His final shot Thursday was an approach at the par-4 sixth, onto the green and 41 feet from the cup.

Garcia finished his round with eight consecutive one-putts. Wagner and Lee, the 25-year-old South Korean who lives in Irving and is playing on his home course, also were bogey-free.

There was a loud cheer at No. 1 when Spieth teed off, and another when he holed a shot from the intermediate rough for a birdie after missing the first green.

Spieth was 3 under through 10 holes before four consecutive holes without a par. He made a short birdie at 11 and a 20-footer at No. 12 before his only three-putt, from 50 feet at the par-3 13th. He quickly got back that stroke with a 13-foot birdie putt at No. 14.

Then at the par-5 16th, Spieth’s 40-foot eagle chance that was rolling toward the middle of the cup when it stopped just short.

The 64 matched Spieth’s best round at the Nelson, where his best finish is still a tie for 16th in his debut as a teenager. He tied for 30th last year when he played after winning the Masters.

After his short appearance at The Players, Spieth talked about needing to do a better job being positive and having more fun. This was a good start at the Nelson.

“It’s just kind of something that everyone goes through. You got to learn to deal with it your own way and everyone gets frustrated when you play golf. You can’t be perfect in this game,” he said. “It’s just little bits and pieces here where I can maybe stay a little more neutral and yeah, when you’re playing well, when you’re 4, 5-under par, it’s a lot easier to be happy.”

Garcia had a quick answer for what he changed midway through the opening round when all of his putts started going into the hole, including a 60-foot eagle putt on the par-5 seventh after a 25-foot birdie putt the previous hole.

Garcia finished a stroke off his Nelson-best 62 he shot as a 19-year-old in 1999 in his first round at Lord Byron’s tournament on the way to a third-place finish. He is back for the first time in five years.

He had only one birdie and needed 18 putts on his first 10 holes, including a 21-foot par-saver after his tee shot into the greenside bunker at the par-3 17th.

“Nice par putt on 17 to stay 1 under and then kind of caught fire on the other nine,” Garcia said.