Spieth opens bid with good round, familiar foe in Scotland 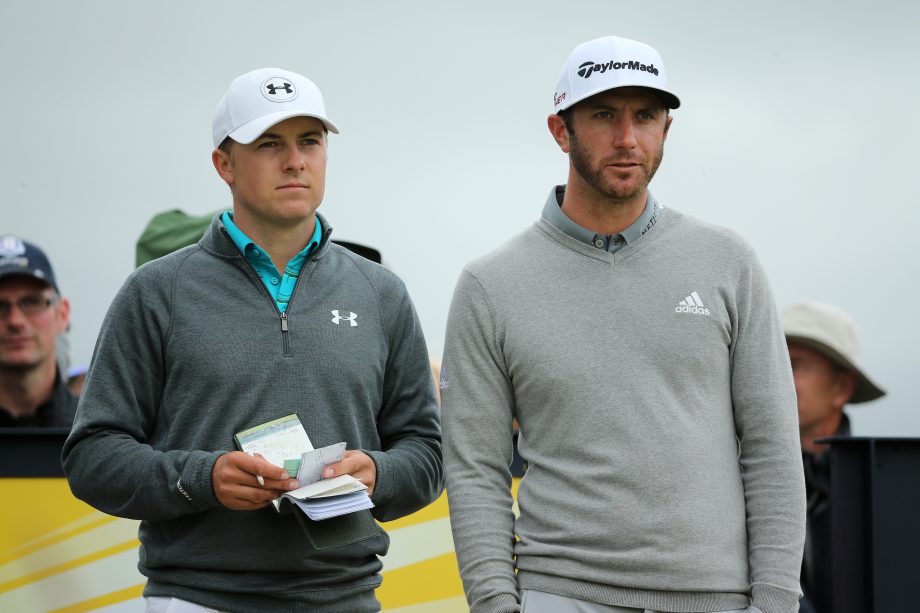 ST. ANDREWS, Scotland – The two main characters from Chambers Bay brought their games across eight time zones and an ocean Thursday and set the tone at St. Andrews for what could be another riveting battle at the British Open.

Spieth quickly seized on his opportunity for a third straight major with six birdies in his first 11 holes, fought through a chilly wind on the inward nine and closed with a birdie for a 5-under 67 that put him two shots out of the lead.

Johnson, whose three-putt from 12 feet on the final hole cost him a shot at the U.S. Open, looked as daunting as ever. He simply overpowered the Old Course with such force that he hit wedge into 10 of the par 4s and had an eagle putt on another. With a pair of big par saves on the tough closing holes, he played bogey-free for a 65 and for at least a day made good on a warning he made earlier in the week.

Asked about Spieth’s chances to sweep the four majors, Johnson said, “Well, I’m playing the next two so we’ll have to see.”

This was hardly a two-man show.

The six players who were one shot behind at 66 included former British Open champion Paul Lawrie and two-time U.S. Open champion Retief Goosen. Jason Day, coming off his scary bout with vertigo symptoms at the U.S. Open, was back on his feet and back in the hunt. Most impressive from that group were Zach Johnson and Danny Willett, who posted their scores as the temperature dropped and wind stiffened late in the afternoon.

Spieth was joined at 67 by Louis Oosthuizen, the last Open champion at St. Andrews.

“If D.J. keeps driving it the way he is, then I’m going to have to play my best golf to have a chance,” Spieth said.

Spieth and Johnson got a break by playing in the morning when St. Andrews was ripe for scoring – 10 of the top 12 scores came from that side of the draw. That didn’t help Tiger Woods, who hit into the Swilcan Burn on the opening hole, made only one birdie and shot 76.

“Guys have been shooting good numbers,” said Woods, a two-time Open champion at St. Andrews. “Unfortunately I did not do that.” Instead, he was headed for a missed cut for the third time in his last four majors.

The afternoon wave suffered in chill and wind so strong that Phil Mickelson hit driver and 3-wood and didn’t reach the 465-yard 13th hole. He said he had to hit 5-iron for his third shot on the par-5 14th. Johnson was pin-high with a 3-wood in the morning. Mickelson made only one bogey on the back nine and shot 70. He called the conditions “fun,” though his smile might not last if the morning group doesn’t face the same conditions.

“We were at a significant disadvantage today,” Mickelson said. “And hopefully, if we’re able to play an entire day tomorrow, it will even itself out.”

Rickie Fowler, coming off a victory in the Scottish Open, said the final seven holes was “hanging on for dear life.” He made two bogeys, one eagle and 15 pars for a 72.

The forecast was for rain early Friday and wind calming as it clears, followed by stronger gusts in the afternoon. Saturday could have gusts approaching 40 mph.

Any duel between Spieth and Johnson is void of animosity. They played in the same group, and during one long wait on the 17th tee, they laughed and chatted as if this were an opening round at a regular PGA Tour event.

“No chat about the U.S. Open at all, as I wouldn’t imagine there would be, other than talking about the differences in the course,” Spieth said. “But I enjoy playing with Dustin. I’ve played a lot of golf with him.”

And he knows what to expect from golf’s most athletic figure. Johnson hit driver on all but three holes, leaving him wedges into the par 4s (except for three longer holes into a hurting wind on the back nine) and a 7-iron that Johnson stuck to 10 feet for eagle on the par-5 fifth hole.

“I’m going to hit driver on every hole if I can,” Johnson said.

Spieth already has shown at the Masters and U.S. Open that power isn’t everything. And while he laid back on several holes – Johnson’s tee shots were on average 36 yards longer – Spieth can score.

He birdied four of the first six holes with putts inside 12 feet and took a share of the lead with a 10-foot putt on the par-3 11th. His lone mistake came in bunkers – a pot bunker in the 13th fairway he had to play out sideways, and the Road Hole bunker on the 17th. He blasted out to 6 feet and missed.

“I’ve played enough golf with him to where I believe in my skill set, that I can still trump that crazy ability that he has,” Spieth said. “I expect when he stands on the tee it’s going to up there miles and down the fairway. I also expect that I can birdie each hole when I stand on the tee – it just happens to be a different route.”

Not many can appreciate the route Spieth is taking. Only five other players since 1934 have won the first two majors of the year. Only Ben Hogan has won the Masters, U.S. Open and British Open in the same year. No one has won all four.

The key for Spieth in the first round was to stay close, and that’s what he did – not in driving distance, but by score, which ultimately is all that matters.

Canadian Graham DeLaet signed for an opening round 1-under 71 while David Hearn was 2-over on the day with a score of 74.