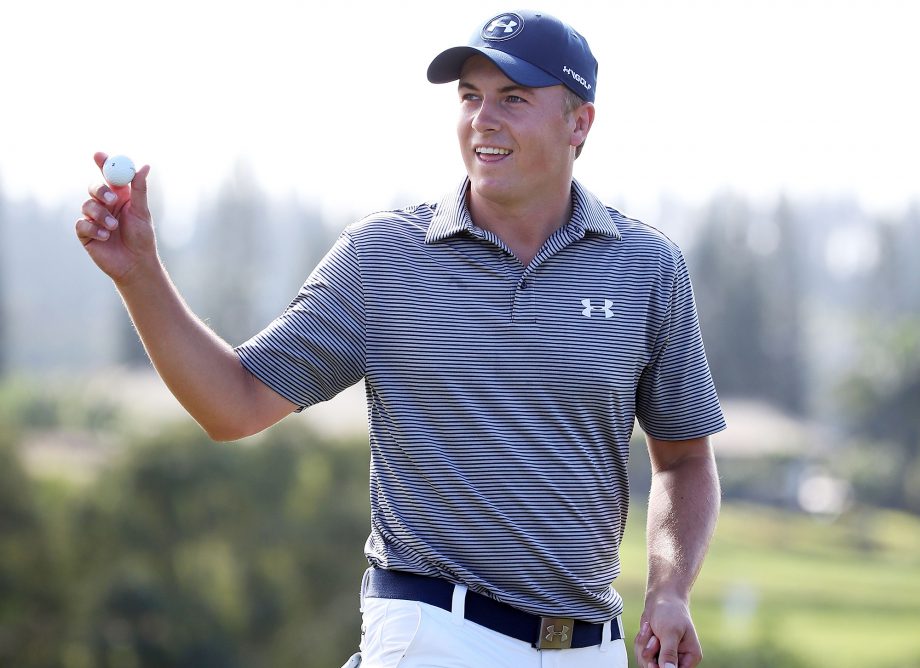 KAPALUA, Hawaii – A new year, and everything is falling Jordan Spieth’s way.

Spieth chipped in for eagle, make a pair of tough par saves late and ended his round Friday with a 15-foot birdie putt into the grain that stopped on the lip and then dropped into the cup for a 9-under 64. It gave him a four-shot lead in the Hyundai Tournament of Champions.

Two rounds into 2016, it already feels a lot like last year.

For all the talk about how he can match what he did last year – two majors, five victories – it might be just as tough to repeat what he has done the opening two rounds. Spieth was at 16-under 130, one short of the 36-hole record at Kapalua set by Ernie Els in 2003.

“Did I see 16 under? Probably not to start the season,” Spieth said.

Kevin Kisner, coming off a big year of his own with his first victory and four runner-up finishes, missed a couple of short birdie putts and still shot his way around the Plantation Course with ease for an 8-under 65 that earned him a spot in the final group with Spieth on Saturday.

“What’s Jordan at? I saw he was at 15,” Kisner said when he finished. “He’ll probably shoot another 15 (under), so I better get going tomorrow, the way he plays. We’ll just make a bunch of birdies and see what happens.”

Birdies have not been in short supply this week with only a moderate breeze and a blazing sun that is making Kapalua pick up some speed. Fabian Gomez of Argentina, one of 14 players making his debut this week, made seven birdies in his round of 66. He joined Kisner and Patrick Reed (69) in the group four shots behind.

Reed didn’t make nearly enough birdies to keep pace. He fell out of the lead for the first time when Spieth made an 18-foot birdie on No. 8, and then Spieth took over with a chip from 35 feet behind the pin that broke sharply into the pin and disappeared.

But it was the back nine where Spieth built his lead.

Even this early in the year, he felt good enough with his driver to be aggressive on the 13th, and it led to a short wedge he hit to 3 feet. He driver again on the 14th, narrowly clearly a bunker and leaving a pitch just short of the green to 3 feet. And then from a hanging lie on the 15th, he drilled a 3-wood just off the back of the green and rolled the putt down to just over 4 feet for a third straight birdie.

Equally important, however, were the pars.

His worst swing of the week with a 52-degree wedge was fat and smothered, and it left him a long, tough putt across the green to 6 feet. He made that for par, and holed a 7-footer for par on the 17th. The final putt was a bonus.

“I go from leading by one to leading by four,” he said. “And that’s huge.”

Kisner only needed five holes to tie for the lead, making two birdies and a 30-foot eagle on the par-5 fifth hole. He started the back nine with three straight birdies, and the only glitch was failing to birdie the two par 5s on the back nine.

“First tournament of the year, kind of rusty, haven’t played in a while,” Kisner said. “Seeing where my game is, I’m looking forward to having a chance on the weekend.”

Danny Lee recovered from a bogey-bogey start to shoot 68 and was five shots behind. Rickie Fowler and Steven Bowditch each had 67 and were another shot back.

Jason Day, the No. 2 player in the world competing for the first time in three months, had a 73 and already was 12 shots behind. He would appear to have little chance of getting to No. 1 this week.