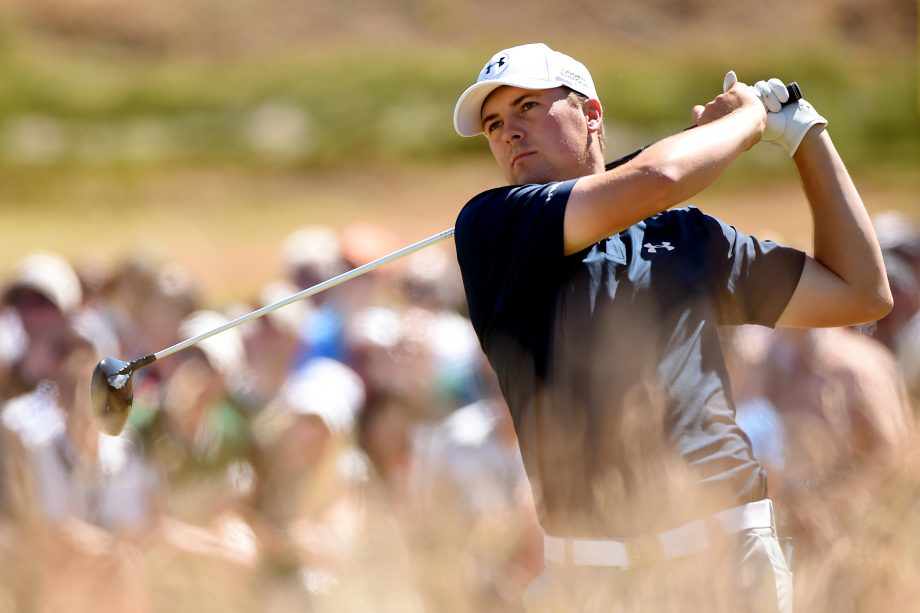 Jordan Spieth during the second round of the 115th U.S. Open Championship at Chambers Bay (Harry How/Getty Images)

It sure feels a lot farther away in this U.S. Open.

Spieth overcame a double bogey on the par-4 18th hole that he called “the dumbest hole” he has played, and a scary moment when Jason Day collapsed to the ground Friday on their final hole at the par-3 ninth from what was later diagnosed as vertigo. Spieth managed to make his birdie for a 3-under 67, giving him a share of the lead with Ryder Cup partner Patrick Reed going into what figures to be a long weekend.

The competition is plenty fierce. The real challenge might be Chambers Bay, from the wobbly roll on the greens to how the USGA presents its toughest test.

Henrik Stenson said it was like putting on broccoli. Reed was so furious after his closing bogey – he made only two pars over the final 12 holes – that he called it “Mickey Mouse golf” on the 18th green.

“But we’re in a good position,” Reed said after a 69, “and we hopefully can have a good weekend and have a chance to win.”

Spieth and Reed were at 5-under 135, one shot ahead of Branden Grace of South Africa (67) and Dustin Johnson, who had the lead for most of the afternoon until he closed with three bogeys on his last five holes for a 71.

Tiger Woods won’t be around to watch it unfold. He shot 76 and posted the highest 36-hole score (156) of his pro career.

Spieth can lean on his experience as a Masters champion, but this major is nothing like Augusta National. For starters, he had a five-shot lead going into the weekend at the Masters. And he is on a golf course where the greens are getting plenty of attention for being bumpy and difficult to make putts.

“It’s playing different,” Spieth said. “And I’m in a very different position. I’m not going to have a five-shot lead. So given it’s a U.S. Open, I imagine they’re going to try to bring us back to par. … So I’ll draw some on Augusta, but at the same time, my patience level has to be even that much higher.”

Day was two shots out of the lead when the Australian crashed to the ground as he headed to the green. Spieth rushed to his side, shooing away photographers as Day sprawled on the ground. Helped to his feet, Day managed to finish the hole with a bogey and a 70 and still was three behind. He was treated at the course, and his agent said he was resting comfortably and hoped to play on Saturday.

Sixteen players remained under par. Spieth is the only one with experience winning a major.

And it’s clear he’s not just satisfied with one.

Not since Woods in 2002 has anyone won the Masters and U.S. Open in the same year. Spieth still has a long way to go, and he realizes it will only get harder on a course that already is perplexing – and to some, aggravating.

Reed has heard about the adage that par is always a good score at the U.S. Open. He opted for three birdies, an eagle and five bogeys over the final three hours, at times going from the lead to trailing but always in the mix. He looked as if he would take the 36-hole lead into the weekend when his tee shot on No. 18 stopped just short of a bunker, and his 7-iron found the middle of the green. The pin was in a valley, however, and from 50 feet away, Reed could get no closer than 20 feet. He three-putted for bogey.

“I hit the ball in the middle of the green on 18 and have no chance to putt a normal putt and stop near the hole, and have to play Mickey Mouse golf to try to make par,” Reed said. “Unfortunately, a bad way to end the day.”

Reed knows what to expect from Spieth – they were 2-0-1 in their partnership as rookies in the Ryder Cup. He’s not worried about anything but Chambers Bay.

Tony Finau, the powerful PGA Tour rookie making his major championship debut, let it rip on his way to a 68. He was in the group at 3-under 137 that included Joost Luiten of The Netherlands (69), Daniel Summerhays (67) and Ben Martin (70).

Rory McIlroy, the world’s No. 1 player, four-putted on No. 17 and closed with a bogey for another 72 that put him nine shots behind. Phil Mickelson shot a 74 and said he struggled with the surface area around the holes. He was eight shots behind.

Woods, again, was never in the picture – not the tournament, not on television. Fox rarely showed him, except for a few shots, including the opening hole when Woods was so far left up a dune that he slipped and fell while trying to size up the shot. He missed the cut for the second time in the last three majors.

“Obviously, I need to get a little better for the British Open, and I’ll keep working at it,” Woods said.

The 18th hole was a par 5 on Thursday, and a par 4 on Friday with the tees moved forward. Spieth wasn’t sure where to go, found a bunker and caught the lip trying to get out. “This is the dumbest hole I’ve ever played in my life,” he said after climbing out of the bunker on his way to double bogey.

His caddie, Michael Greller, helped to calm him down.

“I was really frustrated walking off the tee box, and Michael did a great job coming in and telling me, `Sit back, you’re still very much in this tournament, don’t let this get to you,'” Spieth said.

That might be good advice for the next 36 holes.

Canadian Brad Fritsch will be around for the weekend after a second round 74, while David Hearn missed the cut after posting a round of 75 today.