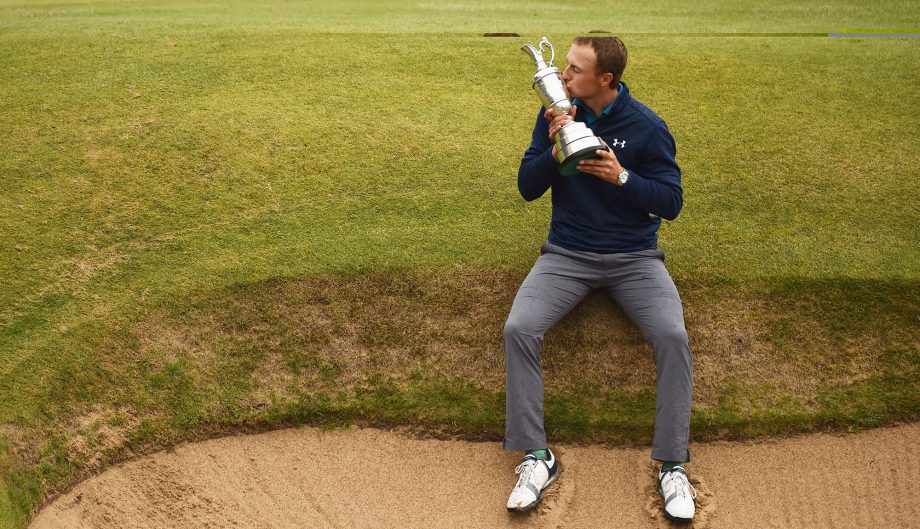 AKRON, Ohio – Jordan Spieth is one week away from a shot at the career Grand Slam.

Spieth returned to Dallas with the claret jug, and it wasn’t more than a few hours before he already had watched highlights – twice – of his British Open victory at Royal Birkdale. The first time was when he couldn’t get to sleep. Then, caddie Michael Greller woke up and they watched it together.

It was no less amazing, from the bogey he salvaged with a shot from the practice range to the birdie-eagle-birdie-birdie streak that followed.

And it gave Spieth a chance to set the record straight on Wednesday.

He playfully disputed the notion that he was 100 yards right of the fairway on No. 13, as television commentary suggested.

Spieth aimed for the right rough on the 13th hole to take bunkers out of play. He said he knew the ball would move a little right because of rain getting on the face of the driver, and he compounded that by leaving the club open.

Even so, he estimated he missed his target by about 20 yards. And then it hit a spectator in the head and went even more to the right, over some tall dunes and into a spot where he had to take a penalty drop onto the practice range.

“It really wasn’t that bad,” he said. “I mean, it wasn’t a good shot. It was a foul ball to the right. But I need to back myself up here in saying that I’m capable of hitting worse shots than that, OK?”

It worked out fine in the end, although Spieth is starting to realize he might be hearing more about playing from the driving range than any of his clutch shots that followed in his three-shot victory for the third leg of the Grand Slam.

He said Royal Birkdale already has asked to have a replica of the 3-iron he hit from the range, “which means that’s going to be the shot that’s pictured there and remembered there, unfortunately.”

Spieth’s spirits have rarely been this high, even with the amount of attention he will face next week at the PGA Championship, where a victory would make him the youngest player to capture the career Grand Slam.

First up is the Bridgestone Invitational at Firestone, and a chance for him to win a third straight tournament. Spieth won the Travelers Championship by holing a bunker shot in a playoff in his previous event before the British Open.

Firestone is a big golf course for a par 70, and it figures to get even longer with rain in the forecast the opening two rounds, leading tour officials to move the tee times to the morning for Thursday and Friday.

Dustin Johnson is the defending champion.

Rory McIlroy thinks he is the defending champion, too.

McIlroy won at Firestone in 2014 during the middle of his big run – the British Open, Bridgestone Invitational and PGA Championship over a four-week stretch. He missed the following year because of his ankle injury, and didn’t play last year when the World Golf Championship was moved to late June to make room in a crowded schedule for the Olympics.

“I think this week and next week, it’s probably my favourite two-week stretch of the year,” McIlroy said.

It will be a different one, for sure. McIlroy fired his caddie after the British Open and will have his best friend, Harry Diamond, on the bag the next two weeks. Johnson is simply trying to find the form that made him golf’s dominant player earlier this year when he ran off three straight victories. That fall down the stairs of his rented home on the eve of the Masters did more than wrench his back. It cost him momentum he is trying to regain.

Spieth has no such issues.

With another major in hand and having turned 24 just last week, Spieth is still soaking up his remarkable rally at Royal Birkdale and the messages he received. McIlroy sent him one. So did Phil Mickelson, who at the start of the British Open had jokingly chided Spieth for accidentally heading to the champions’ area of the locker room.

He has played with Bush even before Spieth turned pro.

“I’ve played a bit of golf with him back in Dallas and he always puts something funny in there,” Spieth said. “He said, ‘Call me. I think I need to give you some driving lessons,’ was what he had in there. I’ve played with him, and I know that I definitely don’t need driving lessons from him.”