Spieth stumbles in 1st round of John Deere Classic 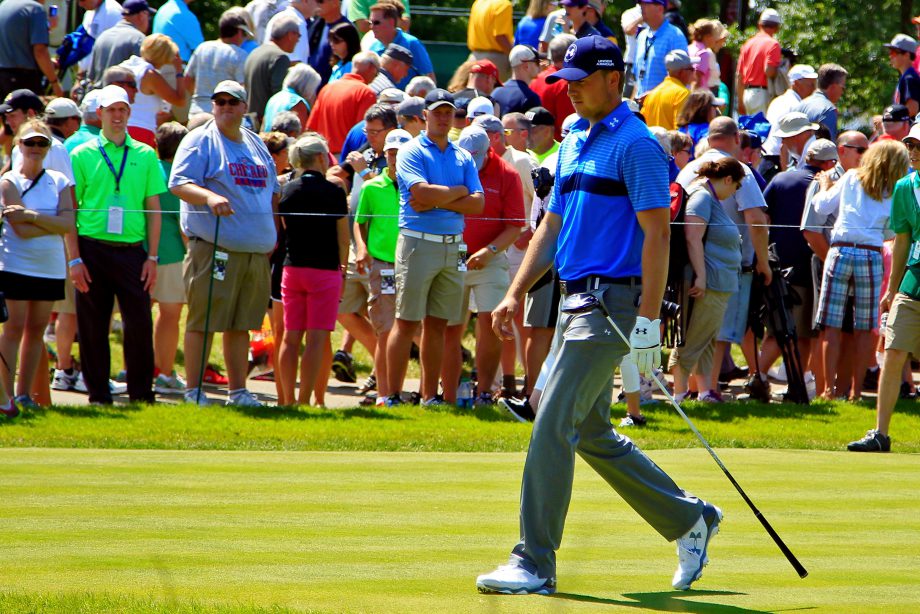 SILVIS, Illinois – For every good shot Jordan Spieth hit, a bad one seemed to follow.

Spieth’s struggles left him eight shots back after the first round of his final British Open tuneup.

Justin Thomas and Nicholas Thompson each shot an 8-under-par 63 to share the lead at the John Deere Classic on Thursday. Spieth was at even-par 71 in his first round since winning the U.S Open.

Spieth, who will go for his third straight major title next week at St. Andrews, had three bogeys in a four-hole stretch and missed a 15-foot birdie putt on No. 18.

“Just a rusty round,” said Spieth, who skipped last week’s Greenbrier Classic. “I didn’t get out on the golf course like maybe I should have.”

Thomas and Thompson were a stroke ahead of Charles Howell III and Luke Guthrie. Three-time tournament winner Steve Stricker led the list of golfers at 6 under.

Spieth is one of just five golfers in the current top 20 of the Fed Ex Cup standings to play in the Quad Cities.

Some even criticized Spieth for supposedly jeopardizing his Grand Slam push by playing this tournament rather than heading over to the United Kingdom early to prep for the Open Championship.

But Spieth nonetheless struggled for the “good feels” he said he was hoping to find at this forgiving 7,300-yard course on the banks of the Mississippi River. In a rare display of frustration, Spieth even slammed his fist on a table after barely missing a short birdie putt.

Spieth finally got something going on his 13th hole, sinking a 32-foot birdie putt after escaping the bunker. He put his next approach within 2 feet for another birdie. But Spieth’s tee shot on the 15th hole wound up in the gallery.

Still, Spieth shot a 70 during his opening round here in 2013 and went on to post his first career win at age 19.

“I had some pretty bad lip-outs, and that’s going to happen. I’m still going to continue to hit good putts. If they drop and I can chip the ball a little better, then I’ll be in good position,” Spieth said.

Thomas had his first career win within grasp with 10 holes to go last week at the Greenbrier Classic. He quickly learned how tough it is to win on the PGA Tour.

Thomas collapsed behind a shaky putter, falling out of contention with a bogey followed by a double-bogey. He then shot a ghastly 8 on the par-4 16th and finished tied for 54th.

On Thursday, Thomas answered with 10 birdies, including a 51-foot putt on his 16th hole.

“I just played a couple of bad holes, and if it wasn’t for that I’m right there. There’s definitely more positives than negatives to take out of the last couple of weeks,” Thomas said about last week’s final round. “I’ve felt like I’ve been close.”

Thompson, who has never won in 214 PGA Tour starts, had an eagle on the par-4 14th to highlight his impressive start.

Guthrie, a 2012 graduate of the nearby University of Illinois, went on a run of seven birdies in 10 holes. But he missed a 15-foot par putt that would have put him atop an unlikely leaderboard.

Iowa native Zach Johnson, who has finished either first or second in three straight John Deere Classics, shot a 66. It was Johnson’s 25th straight round in the 60s at Deere Run.

Canadians David Hearn and Adam Hadwin posted 3-under par rounds of 68 today. Roger Sloan had a 1-under opening round of 70. Mike Weir signed for 73, while Nick Taylor shot 75.