Spieth stumbles out of the blocks at Barclays 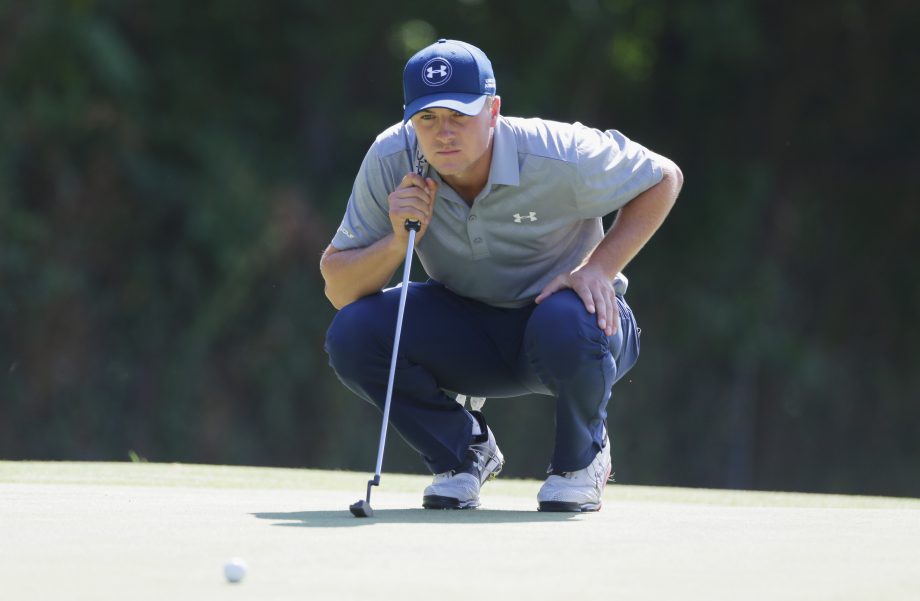 In his first tournament as No. 1 in the world, Spieth had a pair of three-putt bogeys, hit a tee shot in the water, shot 40 on his back nine and wound up with a 4-over 74 in the opening round of The Barclays. It was his highest score since a 75 in The Players Championship, the last time he missed a cut.

“Just lost a little bit of focus,” Spieth said. “All in all, I’m just going to take today as a fluke round. I still believe I’m playing well. It just happened to be an off day on a day where it counted.”

Bubba Watson and Tony Finau powered their way around Plainfield Country Club and each had a 5-under 65. They were in a four-way tie for the lead that included Spencer Levin and Camilo Villegas, players who are in dire need of a good week.

Villegas only got into the top 125 to qualify for the playoffs last week at the Wyndham Championship, with two shots to spare. That was pressure. Now he feels as though he has nothing to lose as he tries to get into the top 100 who advance to the second event next week at the TPC Boston.

“Last week was an important week,” said Villegas, who is No. 123. “It hasn’t been the best of years, and just to be able to sneak in here and give myself a chance … I get off to a good start, and three more rounds to go and keep it going.”

Levin secured his spot in the playoffs with a 63 in the final round at the Wyndham, moving up seven spots to No. 115. Much like Villegas, he felt relieved to have made it to The Barclays, and everything else is gravy. He rolled in three early birdies and dropped only one shot on a mild, blustery day.

“This is a nice stress to have,” he said. “I’m happy with where I am right now and who knows? Maybe I can keep it going.”

Spieth has nothing to lose except the No. 1 ranking he has held for all of two weeks.

With two majors among his four wins, and nine top-three finishes this year, he is No. 1 in the FedEx Cup and virtually assured of getting to the finale at East Lake with a clear shot at the $10 million bonus. He can afford an off week or three. He just didn’t like it.

Playing alongside Watson and Jason Day – the top three in the FedEx Cup – Spieth didn’t miss a fairway on the back nine and was 2 under at the turn, three shots behind Watson. From the fairway on No. 1 to a back pin, he got too aggressive and went over the green, leading to bogey. Facing a 20-foot birdie putt on the next hole, he left in woefully short and backed off the par putt twice before missing it. And then he put his next shot in the water.

The round ended with another three-putt bogey.

Spieth could lose the No. 1 ranking to Rory McIlroy, who is not playing this week as a precaution coming off an ankle injury. The next step for Spieth?

“Do what I’ve done best – bounce back,” he said. “I come back strong tomorrow. I’m not a big fan of the course. It doesn’t fit me very well particularly, but I’ve also won on courses that I didn’t think fit me very well. So I know I can still shoot a low round if I hit the shots that I need to hit, that I’m trying to hit.

“Typically when I hit the fairways, I’m not over par. And that’s what was weird about the round.”

Watson wasn’t hitting all the fairways, but at times that was to his advantage. The greens are pitched in such a way that some shots have to carry to the hole, allowing for spin to make sure it stays below the hole. That’s what caused Spieth problems.

From the rough, Watson was able to land short of the flag and have it roll up toward the hole. That set up ample birdies.

“So No. 9 today with that pin just on top of the ridge, if you draw a decent lie in the rough, it’s almost easier to just run something up instead of worrying about the spin if you’re hitting from the fairway,” Finau said.

Paul Casey and Jason Dufner were in the large group at 66. Day joined Phil Mickelson and Rickie Fowler in the group at 68.

Day pulled out of the pro-am Wednesday after tweaking his back. Oddly enough, he had wanted an MRI on his back before the playoffs to make sure everything was in order. He felt the twinge removing a light box from under his motor home, and decided to have the MRI on Wednesday. It showed everything in good order, and while the PGA champion rubbed his back after a few hooked tee shots, he felt good enough.

Defending champion Hunter Mahan birdied his opening hole and went on to shoot 78. Justin Rose had a 77, while defending FedEx Cup champion Billy Horschel had a 76.