Spieth, Thompson part of 4-way tie for lead at Kapalua 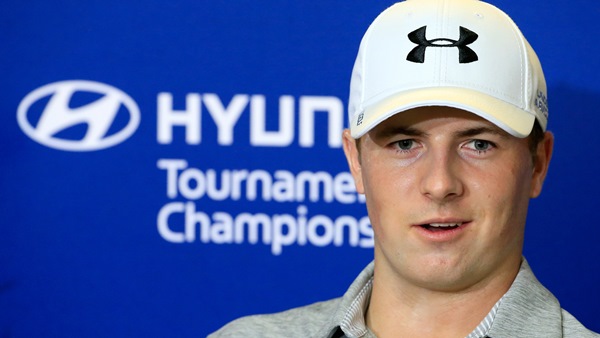 KAPALUA, Hawaii – Jordan Spieth thought the Plantation Course was a blast to play when he arrived at Kapalua. He had even more fun Friday.

Coming off a sensational rookie season, Spieth opened the new year by never coming close to bogey and making a 12-foot birdie putt on the last hole for a 7-under 66. That gave him a share of the lead at the Tournament of Champions with fellow newcomer Michael Thompson, Chris Kirk and Webb Simpson.

“It’s a course that I shouldn’t make a lot of bogeys on if you keep the ball in play and just think your way around the course,” Spieth said. “Ultimately, I did some good preparation and did a lot of hard work the last two or three weeks getting ready for today, and now just happy to be in good position after the first round.”

The wind off the west coast of Maui was the biggest surprise, shifting direction and speed throughout the opening round on a mostly sunny afternoon. But with an inch of rain overnight, the Plantation Course was soft enough that only two players in the 30-man field of PGA Tour winners failed to break par.

Kirk thought he might be one of them when he first got to this slice of paradise. He had not played since winning the McGladrey Classic at Sea Island two months ago, and his first practice round was a skins game with Matt Kuchar and Scott Brown. Kirk got shut out and figures he shot about 80.

When it counted, he was on the money, especially late in the round by closing with five straight birdies.

The last two were not easy, especially with the wind blasting into him on the 17th hole, a par 4 that measures 545 yards down the hill. He hit a poor tee shot and had to smash a 3-wood into 30 feet for an unlikely birdie. He had to hit 3-wood and 9-iron for his final two shots on 18 to make birdie.

“Some slightly more exciting birdies in the last few holes,” he said.

For the opening round of the year, where players are still trying to shake off some rust, the leaderboard has rarely been this tight.

PGA champion Jason Dufner had four birdies and an eagle on his front-nine 30, only to settle into a string of pars on the back nine for a 6-under 67. Kevin Streelman bogeyed his last two holes and also was at 67, along with Zach Johnson and Ryan Moore. The top 10 players were separated by three shots.

Adam Scott, coming off a two wins and a runner-up in Australia, and defending champion Dustin Johnson were among those at 70

“I think the more times you play it, the more advantage you have,” Kirk said. “Today was a little bit funny. Today was a day with the wind … I’ve never played in this wind. All the guys who have played here a bunch of times, you’re very rarely going to see that wind. So that could throw some people off that were used to it.”

Even the players at Kapalua for the first time have watched enough of it on television to know how the ball reacts on the ground. That’s why Thompson was so surprised to see that his tee shot on the 18th bounced back a few feet.

“From what I understand from guys that I’ve talked to, that ball at least rolls 40 yards,” Thompson said. “So it’s playing obviously very different.”

Spieth is getting plenty of attention going into a new year, mostly to see if he can back up his amazing rookie season. He had no status on any tour at this time a year ago, and by the end of the year he had won a tournament (John Deere Classic), finished No. 7 in the FedEx Cup and played on the Presidents Cup team.

He is easing his way into the year, coming out to Maui with only his agent, still finding time to enjoy the Pacific and everything else at Kapalua.

“It’s almost like a vacation tournament in a sense,” Spieth said. “It’s been an awesome week so far. Obviously, I’m here for this reason, and I don’t have my family here with me. So there’s definitely more of an emphasis on golf than maybe some other guys are putting into it here. Maybe that’s an advantage.”

DIVOTS: Along with 13 newcomers to Kapalua, there were a few new – or different – faces on the bags. Simpson is using the caddie of Bubba Watson because the wife of his regular looper, Paul Tesori, is about to have a baby. The biggest change was with Patrick Reed, whose wife has carried his bag for his entire professional career. She is expecting their first child, so her brother is taking over. … Kapalua is the toughest walk on tour, especially for the caddies. So it didn’t help when Kip Henley, the caddie for Brian Gay, felt the bag heavier than usual on the fourth tee. He searched into the umbrella pocket and found a bottle of red wine that had been in the bag since the OHL Classic in Mexico last November. Gay gave it to his wife, who was in the gallery.