Spieth trying to look at British Open as just another event 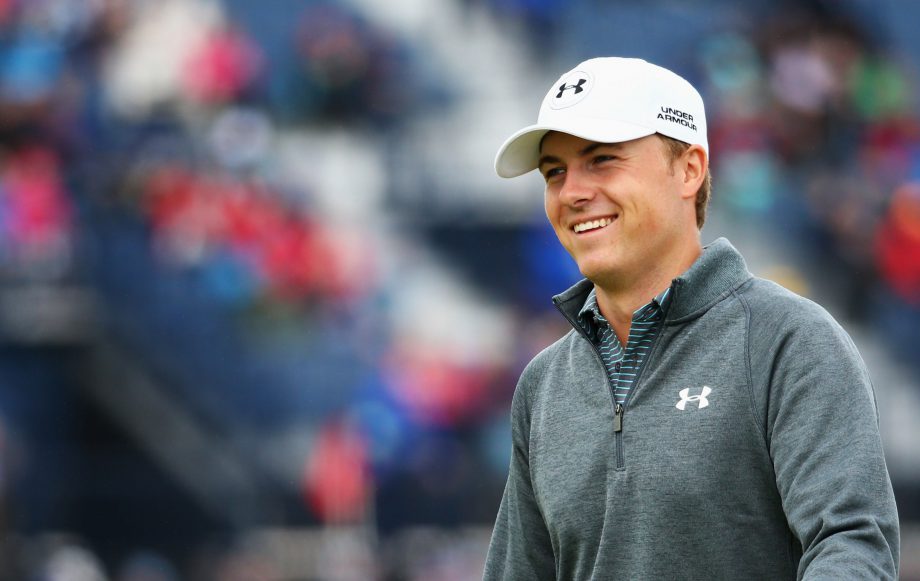 ST. ANDREWS, Scotland – With a chance to match history at the home of golf, Jordan Spieth is trying to make the British Open feel like just another event.

And that might be as tough as any challenge at St. Andrews.

The press room was at capacity and spilled out the door when he spoke to the media Wednesday for the first time this week, creating an atmosphere normally reserved for Tiger Woods or Rory McIlroy. Fans gathered around a board that listed the practice round schedule, scanning up and down until they found Spieth.

“Please hold the cameras until after the shot,” caddie Michael Greller told the gallery. The sound of shutters began at the top of his swing, and Spieth could only laugh when he launched his tee shot. “It’s like this on every hole,” he said.

The 21-year-old Texan does not have the aura of Woods.

He does not have the accomplishments of McIlroy.

He still is the main attraction at this British Open, and would be even if McIlroy – the defending champion and No. 1 in the world – were not out with an ankle injury.

Ben Hogan in 1953 is the only other player to capture the Masters, U.S. Open and British Open in the same year. Only three players since then – Arnold Palmer, Jack Nicklaus and Woods – have ever come to Scotland with hopes of a Grand Slam.

Spieth knows history, too, as much as he’d rather not think about it until he has no choice.

“I like to study the history of golf, and it’s extremely special what this year has brought to our team,” he said. “And to have a chance to do what only one other person in the history of golf has done … I’m sure embracing that opportunity.

“But by the time I start on Thursday, it won’t be in my head. It’ll be about how can I bring this Open Championship down to just another event, get out there and try and get myself into contention.”

He set out for his final practice round on a cool morning with an overcast sky, occasional rain, and not much wind. There is plenty of talk about how ready Spieth will be for his shot at history. He played two full rounds and 10 holes leading up to the start Thursday. He played the Old Course four years ago on his way to the Walker Cup.

Then again, St. Andrews has rarely been this green, this slow, because of recent rain. That takes some of the roll out of the fairway, and with it the unpredictable nature of links golf.

Spieth is the betting favorite, and it didn’t hurt that he won the John Deere Classic on Sunday for his fourth PGA Tour title of the year. Whatever he lost in study by not coming over early, he might have gained in confidence that not much has changed since the U.S. Open.

“Coming over earlier certainly could have helped,” he said. “I just liked the fact that I could go somewhere I could play hard, and possibly win a PGA Tour event in preparation. But certainly, more time on this golf course couldn’t ever hurt anybody.”

The jet lag hasn’t been a problem. Besides, Spieth won the Australian Open in late November, flew straight to Dallas, went to Florida the next day for the Hero World Challenge, and beat an 18-man field of top 50 players by 10 shots.

But this is a full field, and the oldest championship in golf on the links where it all began.

The only concern is the weather. It has been reasonable all week, though the forecast is for wind to increase up to 35 mph (55 kph) with shifting directions.

“It seems a little easier than I think it’ll play,” Spieth said. “So I would have liked to see tougher conditions in practice rounds to get used to prevailing winds and wind switches. That’s part of the fun and the adjustment.”

Everything seems fun to Spieth at the moment.

Just two years ago, he didn’t even have a full PGA Tour card when he won the John Deere Classic by holing a bunker shot on the 18th and winning a playoff. The next day he was in Muirfield, and the 19-year-old was three shots off the lead going into the weekend. He faded badly.

“I remember almost thinking like that was too big for me at the time in a way,” Spieth said. “I felt like I wanted to compete, I loved the pressure, and I felt like I could do it, but it was a position I’d never been in, and it was an odd feeling being in contention in a major on a weekend. It was brief. I didn’t finish well that round.”

He dominated at Augusta National and tied Woods’ record score of 270 in a wire-to-wire victory. In the final hour of the U.S. Open, he kept reminding himself that he had won a major and others in contention had not.

Now, the trick is to forget about the green jacket and the U.S. Open trophy.

“And that’s something I’m just going to have to forget about more than the other two majors.”