Spieth wins a stunner at Chambers Bay for US Open title 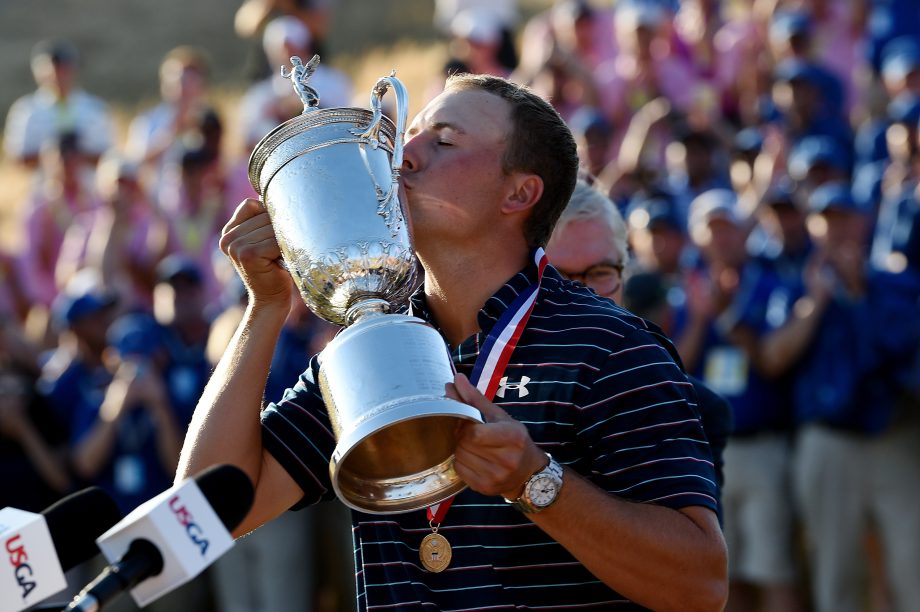 UNIVERSITY PLACE, Wash. – Jordan Spieth is halfway home to the Grand Slam, a prize only three of the biggest names in modern golf have ever chased.

And he still can’t believe how he got there.

Spieth won the U.S. Open in a heart-stopper Sunday with a turn of events even more wild than the terrain at Chambers Bay. He thought he had it won with a 25-foot birdie putt on the 16th hole. He threw away a three-shot lead one hole later. He made birdie on the final hole. And then he thought it was over as Dustin Johnson settled in over a 12-foot eagle putt for the victory.

“I’m still in shock,” he said with the gleaming U.S. Open trophy at his side. “I’ve never experienced a feeling like this. It was a very intense back nine.”

Spieth became only the sixth player to win the Masters and U.S. Open in the same year, and he joined Arnold Palmer, Jack Nicklaus and Tiger Woods in getting the first two legs of the modern slam that Palmer created on his way to St. Andrews in 1960.

That’s the next stop for the 21-year-old Texan whose two major championships could not be any more different. A wire-to-wire runaway at Augusta National. A nail-biter on the edge of Puget Sound.

And another major heartache for Johnson.

“I had all the chances in the world,” said Johnson, who missed six putts inside 10 feet on the back nine and finished one shot behind.

Spieth, the youngest U.S. Open champion since Bobby Jones in 1923, did his part. Even after letting Johnson and fast-closing Louis Oosthuizen back into the game with his double bogey on the 17th hole, Spieth responded with a 3-wood that caught the backboard on the 18th hole and settled below the hole for an eagle putt. He missed it left, made birdie and walked off the green feeling more regret than excitement over his 1-under 69 for a one-shot lead with the big-hitting Johnson behind him.

Make the putt and he wins the U.S. Open. Two putts would force an 18-hole playoff Monday on a course that favors power.

“I’m still amazed that I won, let alone that we weren’t playing tomorrow,” Spieth said. “So for that turnaround right there, to watch that happen, I feel for Dustin, but I haven’t been able to put anything in perspective yet.”

Spieth now prepares for St. Andrews, the next stop on this improbable ride.

Woods in 2002 was the last player to get the first two legs of the slam.

The others to win the Masters and U.S. Open in the same year were Craig Wood in 1941 and Ben Hogan in 1951 and 1953. Hogan won the British Open in 1953, though he never played the PGA Championship because it was held roughly the same time as the British.

Spieth finished at 5-under 275 in winning for the third time this year. He is still No. 2 and closing fast on Rory McIlroy, who has top 10s in both majors this year without being a serious contender.

Spieth becomes the first player since Jones to make birdie on the 72nd hole to win the U.S. Open by one shot – all because of Johnson’s three-putt. He also became the youngest player with two majors since Gene Sarazen in 1922.

For all the criticism of the unique course at Chambers Bay, this was the theater at its finest.

But there will be lingering questions about the condition of the greens, so bumpy that they were referred to as broccoli and Billy Horschel said he lost respect for the USGA. This championship ended with a short miss, the target of complaints all week.

“As you can tell, it’s very difficult to get them in the hole out there,” Johnson said. “The greens were really fast and they were rolling fairly smooth, but it was still bouncing a little bit.”

The final hour was so wild that four players could have won over the last two holes.

Branden Grace of South Africa was tied for the lead when he hit his tee shot on the reachable 16th hole over the fence and onto the railroads that run along Puget Sound. He made double bogey and never challenged again.

Spieth hit into the fescue-covered mounds right of the 17th and made double bogey just as Oosthuizen made one last birdie – his sixth over the last seven holes – for a 67 to post at 4-under 276.

Johnson, who had a two-shot lead at the turn until missing so many putts on the back nine, was forgotten until he stuffed his tee shot on the par-3 17th to 4 feet for birdie. He just couldn’t make one from a little closer when it mattered even more.

“I did everything I was supposed to do,” he said. “I hit the ball really well. I’m proud of the way I handled myself and the way I played today. I just really struggled getting it in the hole today. I didn’t think I was hitting bad putts. I thought I was hitting them pretty good they just weren’t going in.”

It was the fourth heartache for Johnson in the majors, and this was the worst.

Jason Day, who collapsed on Friday with vertigo only to rally for a share of the 54-hole lead, fell back with missed putt and was never in the hunt on the back nine. He closed with a 74 to finish five shots behind.

Grace never recovered from that double bogey on No. 16 and shot 71 to tie for fourth with Adam Scott (64) and Cameron Smith (68).