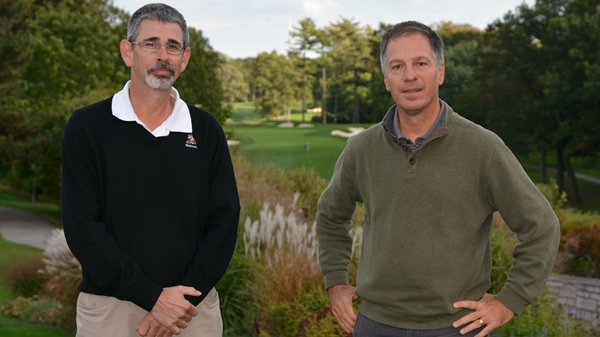 With a 95 per cent approval rating, members voted to rebuild all the greens to USGA specifications plus two fairways on No. 5 and No. 9.

The golf course, which was ranked No. 30 in the world in the February 2014 issue of Golf Digest magazine, will remain open throughout the renovations including clubhouse operations and the outdoor golf academy. The golf course will continue to operate with temporary greens and a series of rotating hole-closures, while reconstruction on the greens takes place. Construction crews are scheduled to start digging up the existing greens on July 8th. Seeding of all new greens is expected to be completed in early September to give the putting surfaces time to grow in, with a projected reopening date in June 2015.

Consulting golf course architects, Tom Doak and Ian Andrew, who were retained by the club last September to review the greens complexes, as well as other potential capital projects, spoke to members along with Property Superintendent Keith Bartlett, as members voted to accelerate the project to this summer.

“When we were here last fall I certainly didn’t think we’d be looking at doing the greens this summer, but the winter storm and ice damage pushed the decision forward,” said architect Ian Andrew, who is also supervising construction of new greens just down the street at Islington G&CC for similar reasons. “Across the Northern United States and throughout Ontario and Quebec ice damage to older poa annua (annual bluegrass) greens and fairways has been extensive at many clubs. The issues surrounding the viability of the poa annua greens at St. George’s that we talked about with members last fall came to fruition this spring.”

Doak, a minimalist designer from Traverse City, Michigan, is considered by many to be today’s preeminent architect. He has personally designed and built five courses in the Top 100 in the world and helped preserve and restore another 10 on the current list, including a much heralded green rebuilding program at San Francisco Golf Club that carefully preserved Tillinghast’s greens.

“These greens projects that I get involved with are because I don’t like to see old golf courses making changes to the greens without some thought for the original design and the character of the course. Many architects I know go in there and make changes and it doesn’t bother them a bit to tear up original green sites and build whatever they want,” said Doak, who has built 35 of his own courses and consults for another 30 clubs.

The goal of the project is to rebuild all greens based on the original design by legendary Canadian golf course architect Stanley Thompson who created St. George’s G&CC in 1929. The most significant change to the course will be returning the green to its original design and site to improve pinning locations and exposure to sunlight. Doak ensured members that it will be a fair challenge when complete and certainly not the easiest hole on the golf course.

A detailed plan outlining changes to individual greens has been provided to members and it addresses poor drainage, shrunken green sizes, slopes within greens, increased pin areas and other issues. Work is starting in July to allow Doak and his shapers to finish up some other projects before coming north, while he continues to oversee two new golf course projects in New Zealand and France this summer.

“This is meticulous work, and we are playing with the smallest percentages,” said Doak who compared it to the exacting detail and pressures of being a surgeon performing open heart surgery on a living patient. “Somebody has to get in there and do it, while all of the time you have to take into consideration the overall condition of the patient.” He told members the key for a successful project is not to over react when making changes, but to focus on ensuring that the greens continue to play as they did in the past.

The Green on Hole No 5 (Photo: Clive Barber)