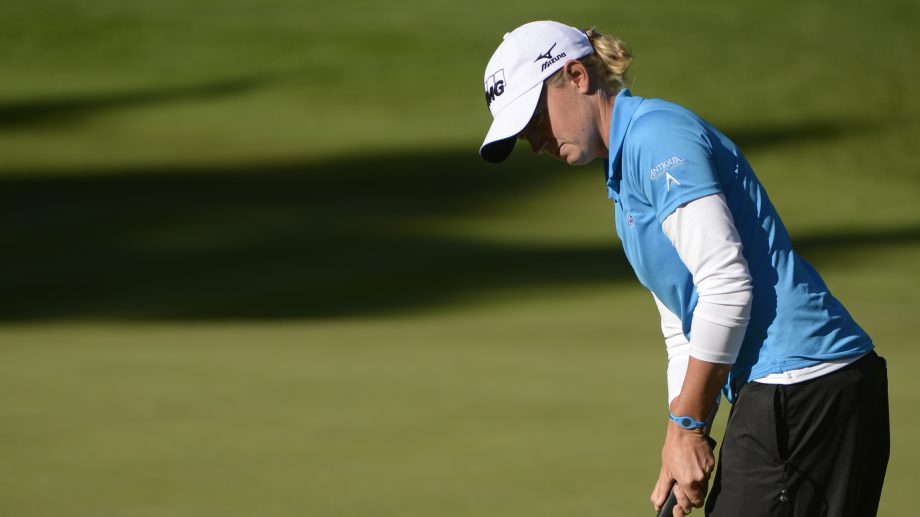 Winless since the Women’s British Open in August, the third-ranked Lewis had a one-stroke lead over 17-year-old playing partner Lydia Ko and first-round leader Karine Icher.

“We all went into the day knowing it would play hard,” said Lewis, who has five runner-up finishes since her victory at St. Andrews. “”It was a test of patience. I took it one shot at a time and wanted to get the ball into the hole as fast as I could. Fortunately, I was able to do that.”

Lewis and Ko played alongside Michelle Wie, dealing with heavy rain and hail that suspended play for just over an hour. Play resumed in steady drizzle that gave way to sunny afternoon conditions that helped several of the late starters.

Wie, the winner last week in Hawaii, was even par after her second 72.

The weather wavered between a slight mist and light shower before pounding the course just after noon, forcing the suspension at 12:36 p.m.

“I honestly thought we’d get it done,” Lewis said. “Then we got to seven and it just poured. We had to call off Lydia from her putt when it started to hail.”

Ko, who turned 17 on Thursday, thought she could get her putt in before being called off.

“I was crazy and out of my mind thinking about putting in the hail,” Ko said. “It started getting dark and I’m glad I was called off.”

After spending the delay eating chicken soup and playing cards, Ko returned to the course and sank the putt.

Icher was tied for the lead with Lewis at 5 under when the horn sounded.

“I ate a little and dried my clothes,” Icher said. “Rain delays are never fun but it happens. Being in the top five to start the tournament is pretty good, definitely my best start this year.”

Top-ranked Inbee Park, Mika Miyazato and Ilhee Lee were three strokes back at 3 under. Park had a 68 in the afternoon, Miyazato shot 69, and Lee had a 73.

“It was a very good putting day and I hit a lot of fairways,” Park said. “I got a little lucky with the weather. I only had to play in the rain for four holes.”

Miyazato finished before the delay.

Second-ranked Suzann Pettersen, returning from a since back injury that sidelined her for three tournaments, was 2 under after a 72.