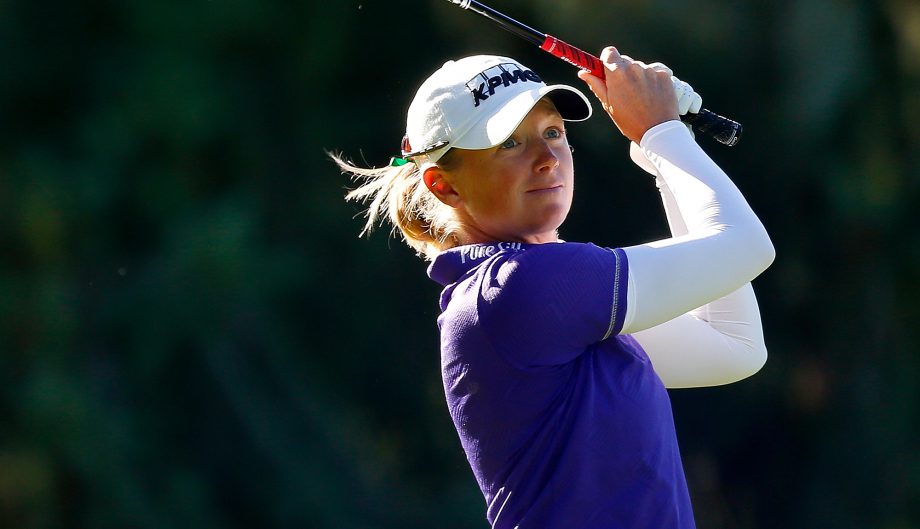 PORTLAND, Ore. – Stacy Lewis took a three-stroke lead Saturday in the Cambia Portland Classic in her bid make a big donation to hurricane relief in her hometown and end a long winless streak.

From The Woodlands in the Houston area, Lewis has pledged to give her earnings – first place is worth $195,000 – to the relief efforts. The 11-time LPGA Tour champion also is trying to win for the first time since June 2014.

“You try not to think about the finish line and what could happen tomorrow, but it would definitely be up there with a major,” said Lewis, a two-time major champion. “It would be probably one of my most special wins, just to be able to do this for the people in Texas and do it, too, when everybody is watching. I kind of put all the eyeballs on me and put some pressure on myself, so it’s nice to kind of see myself performing, too.”

Her husband, Gerrod Chadwell, is the University of Houston women’s golf coach.

Tied for the second-round lead with two-time defending champion Brooke Henderson and In Gee Chun, Lewis had eight birdies – five on the front nine – in a 7-under 65 at tree-lined Columbia Edgewater. She had a 17-under 199 total after opening with rounds of 70 and 64.

Moriya Jutanugarn was second after a 66. Chun was another stroke back after a 69.

Ai Miyazato also was 8 under after a 72 in her final start in the United States. The Japanese star plans to retire after The Evian Championship in two weeks in France.

Lewis is trying to break through in Portland after finishing second twice – two strokes behind Suzann Pettersen in 2013 and four shots behind Henderson last year.

“I know it’s been a while since I won. Everybody talks about it. I really feel like the last few months I’ve been playing some good golf. I’ve just needed a couple good breaks here and there,” Lewis said.

Lewis calls Columbia-Edgewater “one of my favourite courses we actually play all year,” and her recent results back it up.

“You have to hit shots. You have to hit a little fade or a little draw. You can’t just get up there and bomb it,” Lewis said. “My caddie (Travis Wilson) has been here way more times than anybody probably in this field, and so I think we have an advantage as far as knowing the golf course.”

“I have been hitting solid and put myself in a lot of really good chances for birdie. Make some, miss some, but it’s still pretty solid round,” Jutanugarn said. “Back nine just a little rush, a little rough sometimes. Still, I think it hit it pretty good.”

Henderson, playing alongside Lewis, failed to break par for the first time in 11 career competitive rounds at Columbia-Edgewater, dashing the 19-year-old Canadian’s bid to become the youngest three-time winner of a tournament in LPGA Tour history.

Chun is playing the event for the first time. The South Korean player tied for third last week in the Canadian Pacific Women’s Open and has four runner-up finishes this season. Both of her LPGA Tour victories have come in majors – the 2015 U.S. Women’s Open and the 2016 Evian Championship.