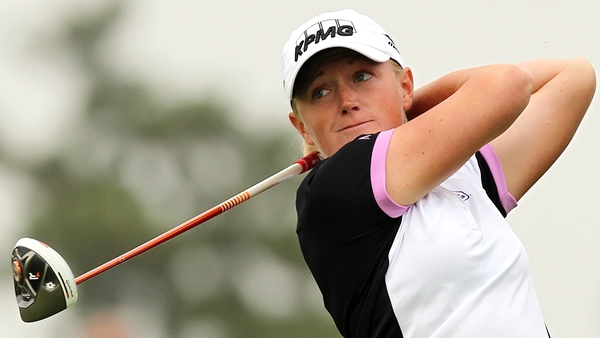 BEIJING – Top-ranked Stacy Lewis birdied the final hole Friday for a 5-under 68 and a two-stroke lead over fellow Texan Brittany Lang after the second round of the Reignwood LPGA Classic.

“It was a day that I just had to stay patient,” Lewis said. “Even coming in, I could have made a few more birdies. Didn’t quite hit the shots around the greens that I needed to.”

Lewis had a 12-under 134 at Reignwood Pine Valley.

She holed some timely putts.

“Putts that kept the round going,” Lewis said. “That’s the thing. I’ve made them at the right time. I’ve had good speed all week.”

Lewis leads the tour with three victories and earnings of $2,214,143. Last year, she finished a stroke behind Shanshan Feng after the Chinese player eagled the par-5 18th.

Lang had a 66 to match the best round off the week – and set up a Saturday pairing with Lewis.

“We’re really good friends though and I have a lot of respect for her on the golf course.” Lang said about Lewis. “Yeah, definitely going to be out of my element, a little intimidated. She’s a great player. But at the same time, I’m trying to get better, too. So playing with her, watching her, and trying to play well and do my thing is going to make me better. If I could play with her on more weekends, then I’ll be doing pretty good. Maybe I can learn something from watching her.”

Germany’s Caroline Masson, South Korea’s Mirim Lee, Spain’s Belen Mozo and Sweden’s Caroline Hedwall were tied for third at 8 under. Masson and Lee shot 68, Mozo had a 69, and Hedwall a 71.

Fourth-ranked Suzann Pettersen followed her opening 74 with a 66 to reach 6 under.

“I played some good golf yesterday. I had six birdies or something and shot 1 over, which is kind of a disaster,” Pettersen said. “Then I made a mess out of two of the par 5s.

“I don’t know if I was a little bit rusty and not sharp enough from not having played for quite a few weeks and it kind of got to me a little bit on certain holes. … Happy to bounce back with 7 under and put myself somewhere back in the tournament.”