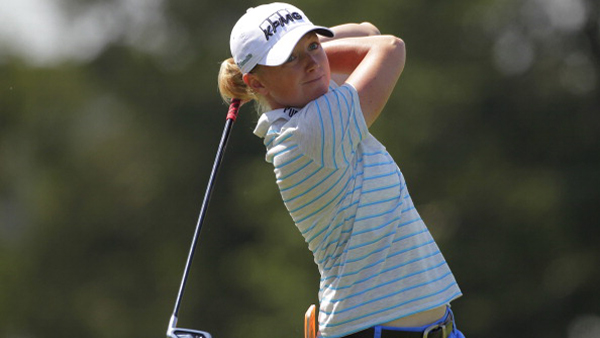 Stacy Lewis moved into position to take the top spot in the world, shooting a bogey-free 8-under 63 on Saturday to match the 36-hole record in the ShopRite LPGA Classic.

The second-ranked Lewis had a 12-under 130 total on the Bay Course at Stockton Seaview Hotel and Golf Club.

A victory Sunday would guarantee Lewis the No. 1 ranking, which Inbee Park has held for 59 straight weeks after taking it from Lewis. Park, playing in the windier afternoon session, had three bogeys on her final five holes to shoot 70 and fall six strokes behind Lewis.

“It would be huge,” Lewis said. “I was only there for four weeks last year, so I never really got to enjoy it. I definitely want to get back because I know kind of more now what to expect with it. Honestly, I’m kind of tired of hearing all the scenarios and hearing everybody talk about it. I would like to take care of that here this week.”

Christina Kim was a stroke back after 67.

First-round leader Jennifer Johnson followed her course record 62 with a 70 to finish at 10 under.

“When you shoot your lowest round ever, it’s hard to follow that up,” Johnson said. “Everything went my way yesterday and nothing was dropping today.”

“I like this golf course and the fans just seem to come out of the woodwork for this tournament,” Lewis said. “It’s awesome.”

Lewis came on strong in the second round after admitting she felt “uncomfortable over the ball” during her first nine holes Friday.

She also climbed to the top of the leaderboard despite a crazy travel week. After tying for 10th at the Airbus LPGA Classic in Mobile, Alabama last weekend, Lewis flew to Pinehurst, North Carolina, to play two practice rounds in preparation for the U.S. Women’s Open on June 19-22. She then traveled to Seaview for Wednesday’s Shoprite Classic Pro-Am, flew in a private helicopter to New York City to participate in a press conference announcing the KPMG Women’s PGA Championship, and returned to the Jersey Shore on Thursday.

“I know my game is in a good place,” Lewis said. “It was a lot but I didn’t think it was going to be too much.”

Kim had her first bogey of the tournament on the par-4 16th but rallied for five birdies on her next eight holes, the most memorable of which came when she drained a long putt on No. 5.

Anna Nordqvist (65) and Gerina Piller (67) were tied for fourth place at 8 under. Karrie Webb, last year’s winner, followed her opening-round 69 with 70 to reach 3 under.

Third-ranked Lydia Ko (75) avoided missing her first cut in 27 career LPGA starts with birdies on her final two holes to finish at 1 over. The 17-year-old had five bogeys and triple bogeyed No. 4.