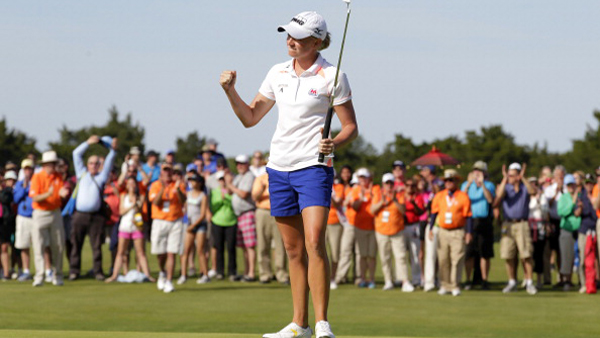 WATERLOO, Ontario – Stacy Lewis is all about winning, figuring everything else will fall in place.

Everything did Sunday in New Jersey when the 29-year-old Texan won the ShopRite LPGA Classic to reclaim the top spot in the world ranking from Inbee Park.

“Getting the No. 1 was just a bonus,” Lewis said Wednesday, a day before the start of play in the Manulife Financial Classic at Grey Silo.

She also won the North Texas LPGA Shootout in early May after finishing second six times in her previous 16 events since winning the Women’s British Open in August.

“I feel like over the last year I’ve put myself in position to win so many times that I’m very comfortable there,” Lewis said. “You know, I wouldn’t say it gets easier, but I would say you definitely get more comfortable. Sunday last week, the nerves were there initially, but then once we got going I felt like if I took care of my game, there’s no way anybody was going to beat me.”

Park is winless in 10 tour starts this season after sweeping the first three majors last year and finishing the season with six victories.

“I’m the No. 2 right now and my life didn’t change,” she said. “I’m just still doing the same thing, doing my routine, practice round, pro-am, playing again. Yeah, it’s just numbers, but my life is the same life.”

In the two previous events at Grey Silo, Lewis tied for fifth and sixth.

“It’s a golf course you have to make a ton of birdies on and I led the tour in birdies last year, and I think I’m leading that stat this year, so I think that fits my game,” Lewis said. “You have to go out there and attack and make as many birdies as you can.”

Last year, Hee Young Park beat Angela Stanford with a birdie on the third playoff hole. They finished at 26-under 258 to match the tour record for lowest total score.

“This golf course is in perfect shape, everything, and I know how I was feeling and green conditions pretty much perfect, so easy to get used to it,” Hee Young Park said. “(Earlier in the week there) was rain here so it got softer, so I can hit more aggressive, which is good.”

She’s has been bothered by a lingering wrist injury this season.

“It feels a lot better and I’m back to pretty much normal. I can play,” she said. “The last few weeks I played pretty good, so I think it’s ready.”

Lewis hopes the wind sticks around for the weekend.

“I would much rather play a golf course when it’s playing hard than when it’s playing easy,” she said. “What’s surprised me the last two years is that I have played well here, because I don’t like courses that are just a straight birdie-fest and you go crazy. I like it when it’s hard and you have to golf shots and things like that. The wind this year, I’m actually pretty excited about.”

Third-ranked Lydia Ko also is in the field. The 17-year-old Ko won the Swinging Skirts LPGA Classic in California in late April and has five top-seven finishes in 11 tour starts this year.

The teenager won the Canadian Women’s Open as an amateur the last two years and took the Swinging Skirts World Ladies Masters in December in Taiwan in her second start as a professional. She has six victories in pro events, also winning in Australia and New Zealand.

DIVOTS: Brooke Henderson, the 16-year-old Canadian who is third in the world amateur ranking, received a sponsor exemption. … Brittany Lang won the inaugural event in 2012. … Manulife has extended its sponsorship deal through 2016. … The tour will return to Ontario in August for the Canadian Women’s Open at London Hunt.