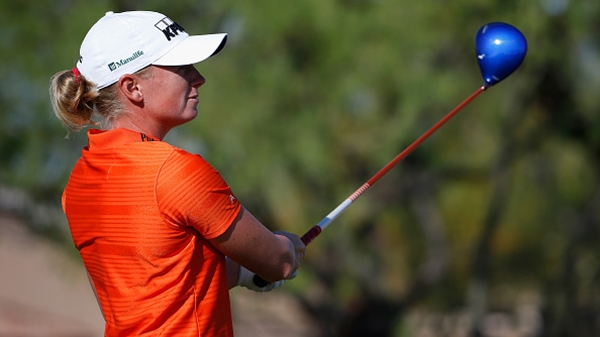 “It was just solid,” Lewis said. “The golf course is in such good shape, you get some putts around the hole, you can definitely make them. Just hit a few close. I hit a 4-iron into about 6 inches, so that always helps.”

The start Thursday was delayed four hours because of rain and wet conditions.

South Korea’s Hyo Joo Kim was a stroke back. She played her final 12 holes Friday.

The 17-year-old Ko has six LPGA Tour titles and 10 worldwide victories in pro events, winning the Women’s Australian Open and the Ladies European Tour’s New Zealand Women’s Open in consecutive weeks this year. She nearly won last year at Desert Ridge, squandering a three-stroke lead with 13 holes left and ending up tying for second – a stroke behind Karrie Webb.

“I wasn’t surprised Lydia shot what she did,” Lewis said. “Just kind of motivated me to get up there with her.”

The second-ranked Lewis had a 50-minute break before starting the second round.

“If you’ve got to play a lot of holes and you’re on a roll, that’s where you want to be,” Lewis said. “Things feel good. It will be a quick turnaround.”

“Very solid,” Webb said. “I feel like 5 under is perhaps the worst I could have shot, so that’s always a nice thing to say. I felt very comfortable out there.”

Michelle Wie opened with a 73 on Thursday. She’s playing in a group with Ko.