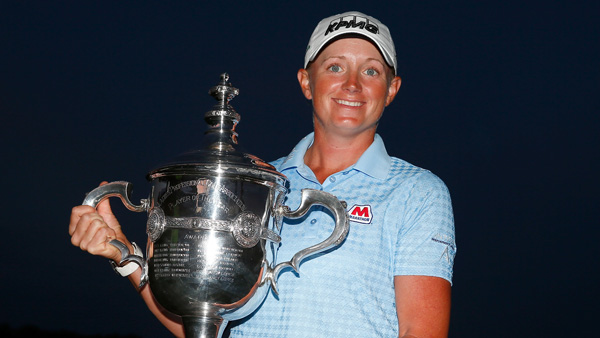 NAPLES, Fla. — Stacy Lewis became the first American in 21 years to sweep the three biggest awards on the LPGA Tour, which she considered more valuable than a $1 million bonus.

Lewis closed with a 1-under 71 in the CME Group Tour Championship on Sunday, tied for ninth in the LPGA Tour finale. But it was enough for her to win LPGA Tour player of the year for the second time in three seasons. She also won the Vare Trophy for the lowest scoring average and the money title.

The last American to sweep the awards was Betsy King in 1993.

“The $1 million would have been nice,” said Lewis, who was six shots out of a playoff. “But those three, that’s what I came here for. … It’s been hard to play the last four days, and it’s nice to be done. I didn’t have my best stuff. I’m pretty surprised to finish where I did.”

Two years ago, the 29-year-old Lewis became the first American since Beth Daniel to win the points-based player of the year. She added the Vare Trophy a year ago. And on Sunday, she collected all three at the same time.

Inbee Park, the No. 1 in the world, was the only player who could have kept Lewis from the awards. She trailed in all of them, but struggled all week at Tiburon Golf Club and finished in a tie for 24th, four shots worse than Lewis.

It was the first time in LPGA history that four women had a sub-70 scoring average.

Lewis felt as much stress this week as at any major, mainly because Park was on a roll and Lewis was struggling. She received one good omen Saturday night when her family ordered Chinese food and her father tossed her a fortune cookie.

Lewis kept it in her pocket during the final day of the tournament and read it aloud to the media when she was done: “Good news of long-awaited event will arrive soon.”

“The last couple of weeks have been tough,” Lewis said. “The game hasn’t been exactly where I wanted it to be. I figured (Park would) keep it rolling this week, and I knew I needed to find something. It was probably four of the hardest rounds of golf I’ve ever played.”

Lewis won three times this year, though she failed to do so at a major. Still, she wouldn’t trade what she ended up with.

“Before this week, it was good. Now it’s a little bit better,” Lewis said when asked to measure her year. “I’d like to have taken a major championship. But winning these three awards makes it almost great.”