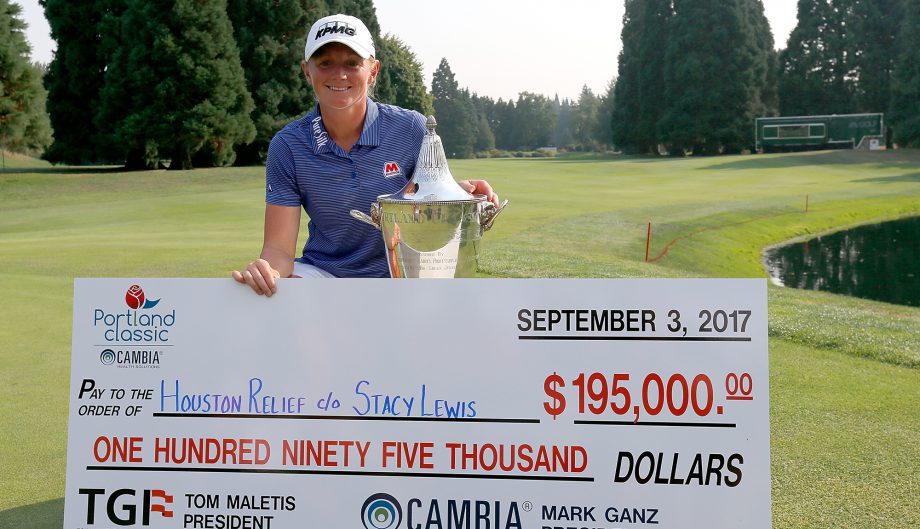 Lewis ended a long winless streak Sunday at Cambia Portland Classic, with her $195,000 in winnings going to the relief efforts in her hometown area. Her two biggest sponsors also stepped up, with KPMG matching her donation and Marathon Oil kicking in $1 million.

“Probably was more pressure, to be honest,” Lewis said. “Honestly, I think that’s what helped me through the week, just knowing people wanted me to do well. People wanted me to win this for Houston. To do it when I added pressure to myself is a pretty good, pretty cool deal.”

The 32-year-old Lewis, from The Woodlands just north of Houston, won her 12th LPGA Tour title and first since June 2014, ending a frustrating stretch that included 12 runner-up finishes. She closed with a 3-under 69 to hold off In Gee Chun by a stroke at tree-lined Columbia Edgewater.

“Just kind of handed over control and said, ‘Take me. Take me to the finish line. Let me know what happens, God,”’ Lewis said. “It was just amazing how when you let go of the control like that how great you can play.”

Lewis embraced and kissed husband Gerrod Chadwell, the University of Houston women’s golf coach, on the 18th green. She didn’t know he had made the trip to Oregon until he appeared on the green – after hiding out in the Golf Channel tower during the round.

“I was fine until he showed up, and then I started crying,” Lewis said. “You go through all the emotions of finishing second when sometimes it’s your fault and sometimes it’s not, and things just don’t seem to ever go your way and you get really frustrated at times. He went through all of that with me, and it was probably as hard on him as it was on me. So just to have him here and get to share the win with him was pretty special.”

The couple lives at the Golf Club of Houston – the site of the PGA Tour’s Shell Houston Open – in Humble.

“I kind of resigned to the fact that whatever was going to happen was going to happen,” Lewis said. “I just needed to commit to my golf shots and hit them. I pulled off a great up-and-down on 17 and probably hit one of shots of my life on 18.”

Chun also parred the final two holes in a 66.

Lewis finished at 20-under 268 after opening with rounds of 70, 64 and 65 to take a three-stroke lead into the final round. She also broke through in Portland after finishing second twice – two strokes behind Suzann Pettersen in 2013 and four shots behind Canadian Brooke Henderson last year.

On Sunday, she birdied four of the first seven holes, and made the turn four strokes ahead of Chun.

Chun cut the lead to two with birdies at the par-5 10th and 12th. Chun missed a short birdie putt at the par-4 14th, and pulled to within a stroke with a birdie at the par-3 16th.

Perhaps the biggest hole of the day for Lewis came at the difficult 17th when she hit her approach over the green and saved par after chipping 7 feet past the hole.

“I hit a really good chip,” Lewis said. “I knew I was going to have at least a 5-footer, and just hit one of the best putts I’ve hit on that back nine.”

Chun missed a 10-foot birdie putt on the hole.

“It was a great round today,” Chun said. “But Stacy’s play was good, too. I really enjoy playing with Stacy. I know Stacy have a little hard time before, so I want to give her a big congratulations.”

The South Korean player was bogey-free the final 53 holes.

Brittany Altomare (69) and Moriya Jutanugarn (72) tied for third at 14 under.

Ai Miyazato shot a 67 to tie for fifth at 13 under in the Japanese star’s final U.S. start. The 2010 Portland winner plans to retire after The Evian Championship in two weeks in France.

“It’s been a tremendous week for me,” Miyazato said. “On the last hole, I got really emotional … I have so many great memories of this tournament. This is my favourite city forever now.”

Henderson, trying to win for the third straight year, had a 70 to tie for 15th at 10 under. The 19-year-old from Smiths Falls, Ont., had an eagle and three birdies in a four-hole stretch, but finished with a triple bogey on 18.