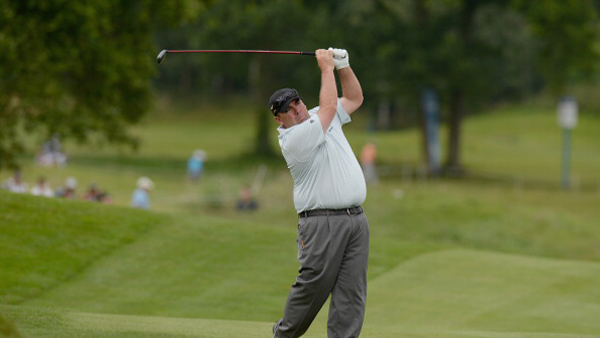 SAINT-QUENTIN-EN-YVELINES, France – Kevin Stadler increased his lead at the French Open to three strokes by shooting a 3-under 68 in the second round on Friday.

The American made six birdies and dropped three shots, including a double bogey on his last hole, for a 10-under 132 total.

“I wasn’t expecting to play this well obviously, but I enjoyed the golf course,” Stadler said. “I thought it was a course that suited me from the very beginning.”

Stadler was making his French Open debut but quickly got a good feel for this punishing golf course that will host the Ryder Cup in 2018.

“(If) he keeps playing (like) that, he’s going to be tough to catch,” McDowell said about Stadler.

Stadler had a six-stroke cushion after 16 holes Friday and was on course to tie the record for the tournament’s lowest score after the first two rounds, set by Seve Ballesteros with 130 in 1985.

But he failed to find the fairway with his first three shots on the par-5 No. 9, then sent the ball into the bunker with his fourth.

“Been struggling the last couple months, but I had a nice week off last week,” Stadler said. “I pretty much just completely got away from it, didn’t really touch a club other than one day, and got over here, and just kind of recharged the batteries a little bit. The swing flaws kind of disappear when you don’t touch a club too often, and I felt comfortable from the get-go once I got here.”

Stadler won the Phoenix Open in February and was in a tie for eighth at the Masters in April.

Siem finished the first round one stroke behind Stadler, but lost further ground by making five bogeys and four birdies.

“The 10-under, when you see that all day long on the scoreboard this morning with no wind, I just tried to keep up there,” Siem said. “I just tried to equalize that. Just tried to shoot 4-under today. That was the problem. You have to be very, very patient on this golf course, otherwise it kills you, and that’s what happened today.”

Jose Maria Olazabal, the 2001 champion, retired because of a back injury.