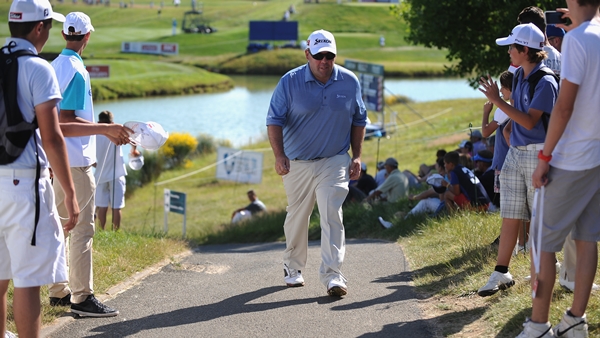 SAINT-QUENTIN-EN-YVELINES, France – In his French Open debut, Kevin Stadler shot a bogey-free 7-under 64 to lead by a stroke after the first round on Thursday.

The American golfer, who won the Phoenix Open in February and shared eighth place at the Masters in April, made seven birdies on a punishing golf course that will host the Ryder Cup in 2018.

“Not making bogey was something I didn’t think possible in my practice rounds,” Stadler said. “It’s one of my favorite courses. It’s spectacular.”

Marcel Siem of Germany was in second place, one stroke clear of Stephen Gallacher of Scotland. Jamie Donaldson of Wales and Felipe Aguilar of Chile were tied for fourth at 4 under.

Defending champion Graeme McDowell (70) and U.S. Open champion Martin Kaymer (72) stayed in contention while Padraig Harrington (74), Thomas Bjorn (76) and Victor Dubuisson (76) will need a good performance in the second round on Friday to make the cut.

Siem, who won the French Open in 2012 but missed the cut last year, has had very little sleep since the birth of his daughter, Carlotta Sophie, 10 days ago. But he still found the energy in the morning to offset two bogeys with eight birdies for a 65 that only Stadler was able to eclipse.

“I cannot wait to go to bed to be honest,” Siem said. “On the third, I already said to my caddie: `I’ve got to go to bed, I need to get my batteries loaded up.’ I’m really pleased I stayed patient today.”

Gallacher took the lead from Siem by picking up a shot on No. 5, but he slipped down the leaderboard with two bogeys in his last three holes at Le Golf National.

“You never feel comfortable on this course,” Gallacher said. “Every shot’s got a risk in the water. So you’ve got to keep on your toes. You’ve got to concentrate all the time.”

Gallacher won the Dubai Desert Classic in February and was tied for second at the Nordea Masters in Sweden last month.

David Howell carded a 72 in his 500th appearance on the European Tour, becoming at 39 the second youngest golfer to reach that milestone.

“It all comes down to desire, and also your health,” Howell said. “I’ve had my injuries along the way and my niggles, and they are still there. But I’m feeling pretty good at the moment.”

Ryder Cup Captain Paul McGinley withdrew because of a shoulder injury and was replaced by Andrew McArthur (76).