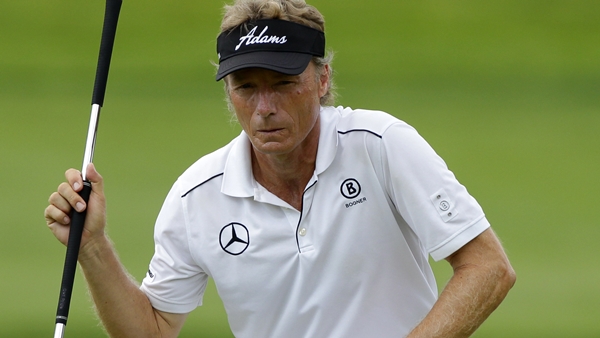 PITTSBURGH – Bernhard Langer’s game is in splendid shape. His driver? Not so much.

Whether the two-time Masters champion can lock down his first Senior Players Championship could depend on how he deals with a backup.

Langer shot a 6-under 64 on Friday to take the lead at the halfway point of the third major on the Champions Tour, birdieing No. 18 to take a two-shot lead over Bill Glasson and Doug Garwood. Langer was at 11-under 129 as he searches for his first victory at the Senior Players after five top-10 finishes.

Rather than cruising, however, the 56-year-old Langer is wary after noticing the driver he has had in his bag for the last two years had started to rattle after teeing off on 18.

“I’m going ‘Wow, what’s the rattling for?”’ said Langer, a two-time winner this season. “And I grabbed the head, it was loose. So something broke inside the screw that holds the shaft in, I think it’s broken.”

It was one of the few things that went wrong for Langer on a day vulnerable Fox Chapel barely put up a fight. Doug Garwood, tied for the first-round lead, and Bill Glasson were two strokes back. Garwood birdied two of the last three holes, and Glasson had a 64.

Joe Durant, also tied for the first-round lead, was 8 under along with Michael Allen, John Riegger and Mark McNulty. Defending champion Kenny Perry moved into contention at 7 under with a 63, the low round of the tournament so far.

After being allowed to lift, clean and place their golf balls during the opening round following several days of rain, players were forced to play it down everywhere but the 14th hole at the 6,710-yard layout.

It did little to affect the deluge of low scores. More than half the 81-player field was at even par or better.

Through two rounds, nobody was lower than Langer. He opened with a 65 and used a little bit of luck to jump start his round Friday. He attempted to drive the green on the uphill 295-yard par-4 seventh only to watch his ball sail into the left rough. His pitch from 25 yards bounded onto the green and into the cup for an unlikely eagle.

“I didn’t have much of a shot,” Langer said. “I short-sided myself and landed the pitch just perfect and it rolled right in. That was a bonus.”

The attack kept coming. He added four more birdies – all from inside 12 feet – including tricky left-to-right putt from 8 feet on the par-5 18th that gave Langer a two-shot cushion. Langer’s two-round score of 129 is the second-lowest at the midway point in a tournament that dates to 1983.

Yet Langer isn’t exactly blowing away the competition. There are some bold-faced names behind him, and some unfamiliar ones too.

Garwood is a journeyman who spent most of his prime selling insurance when he wasn’t playing on mini-tours. Yet he has gaining confidence with each passing week on the 50-and-over circuit. He nearly won at the Principal Charity Classic in Iowa last month before falling in a playoff.

The 51-year-old joked after the first round he wanted to lower expectations heading into the third major tournament of his Champions career, figuring if they’re low enough he’ll have no trouble surpassing them. Consider it done.

“Every day is like Disneyland for me,” Garwood said.

He opened with back-to-back birdies before giving both shots right back with consecutive bogeys. Undaunted, he kept firing at the slow, damp greens that have turned the tournament into so much target practice. He ended his round by birdieing the 18th for the second straight day.

Garwood was later joined by Glasson at 9 under after Glasson shot one of four 64s on a course that doesn’t look like it will firm up anytime soon.

That could turn the weekend into a shootout, which fits Perry just fine. A year ago he began the march to his first major title by shooting a 63 in the second round. He did the same Friday, though he could have gone even lower. He missed a 6-footer for birdie on No. 15 and appeared stunned when his 4-footer on No. 17 slid left of the hole.

Those are two putts the perpetually streaky Perry would like to have back. He spent the first two days playing alongside Langer. Now he’ll spend the next two chasing the meticulous German who already has two Champions Tour majors to his credit.

“He’s playing flawless golf,” Perry said of Langer. “He’s hitting it perfect, so he’s going to be a hard man to catch.”