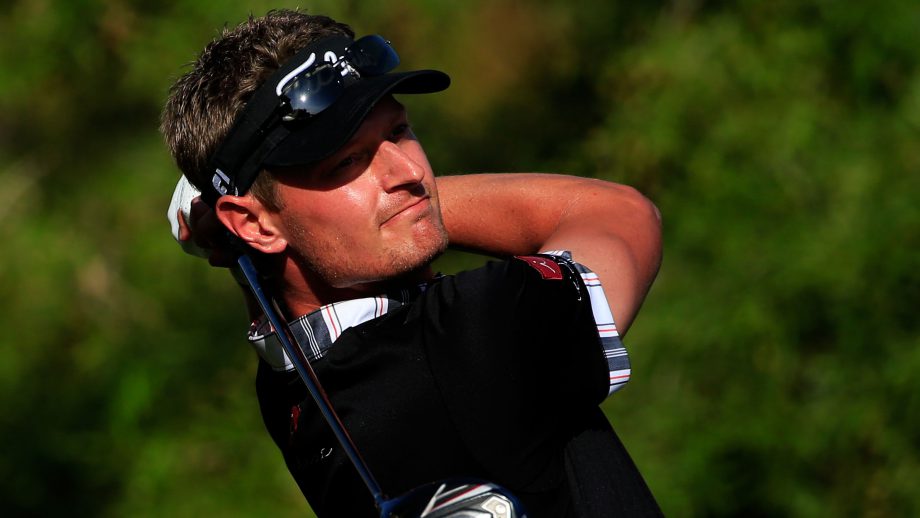 LAS VEGAS – Brett Stegmaier birdied the final hole Saturday for a 3-under 68 and a one-stroke lead in the Shriners Hospitals for Children Open.

Making his fifth career PGA Tour start, Stegmaier rebounded for a bogey on the par-3 17th with a 13-foot birdie putt on the par-4 18th to reach 13-under 68. The 32-year-old former University of Florida player completed a second-round 66 on Saturday morning for a share of the lead.

He’s sticking with a simple approach.

Morgan Hoffman was second after a 66. After making four birdies in a four-hole stretch, he hooked his drive on 18 into the desert rocks and ended up saving bogey with a 10-foot putt.

“I was just saying if I could see the ball in there and it wasn’t in the bush, I’d give it a shot,” Hoffmann said. “Yeah, lucky to get out of there with bogey.”

Jimmy Walker, former UNLV player Chad Campbell and 2011 winner Kevin Na were tied for third at 11 under. Walker had a 69, Na shot 68, and Campbell 70.

“I think that the pins are a lot more difficult than they normally are, a lot of tough pins,” Walker said. “It’s like they don’t want us to make birdies. A lot of holes, par is pretty good here.”

“There wasn’t a whole lot of low scores,” Campbell said. “It was pretty hard to get to those pins. But I feel like I played OK, and looking forward to tomorrow.”

“It was a good 6-iron for me, perfect yardage,” Cejka said. “I tried to hit it a little bit right. I struck it well, and pitched pretty good and was rolling toward the pin and then suddenly disappeared. It’s a great bonus, especially in front of the home crowd here, and then to top it off with a birdie on 18, that’s fabulous.”

Rickie Fowler was tied for 28th at 6 under after a 70, playing the last four holes in even par without making a par. He eagled the short par-4 15th, hitting a drive to 5 feet, then hit into the water on the next two holes for a bogey on the par-5 16th and a double on the par-3 17th. He birdied the par-4 18th with a 12-foot putt.

“It was a little irritating,” Fowler said. “Sixteen and 17 cost me a lot of shots this week. It would be nice to possibly get some back there. I haven’t made particularly bad swings, just hit it kind of the wrong directions at the wrong time.”