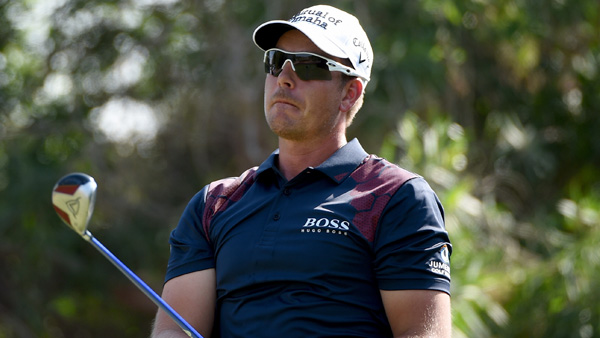 DUBAI, United Arab Emirates — Defending champion Henrik Stenson and Spain’s Rafa Cabrera-Bello opened up a three-shot lead after the third round of the season-ending DP World Tour Championship on Saturday.

Stenson posted four birdies in a 4-under 68 to join Cabrera-Bello who birdied four of his closing five holes in a 7-under 65. Both players have an overall 14-under 202 on the Earth Course at Jumeirah Golf Estates.

McIlroy had back-to-back double bogeys at the 12th and 13th while Olesen was left counting the cost of an 18th-hole double bogey.

If he wins, Stenson will finish the 2014 European Tour season as runner-up to McIlroy in the Race to Dubai.

The 30-year-old Cabrera-Bello, who had an opening round 73, is no stranger to winning in Dubai after capturing the Dubai Desert Classic title in 2012.

“The round was a little bit crazy, because I haven’t felt I’ve played perfect at all,” Cabrera-Bello said. “I had to work really, really hard, especially at the beginning but I managed to hang in there and end up shooting 3 under on the front nine when I could have easily shot 2 or 3 over.”

McIlroy remains quietly confident of a sixth victory this year despite the pair of double bogeys.

The four-time Major winner three-putted the par-four 12th hole and missed the green at the next. McIlroy had trouble with two wedge shots on the 13th and trails the leaders by four shots.

“It was just a bad swing firstly on 13 but it was annoying to follow up a double on 12 with another one on 13,” McIlroy said. “I was a little frustrated but it was nice to get a couple back on the last few holes, at least keep myself within touch going into tomorrow.”