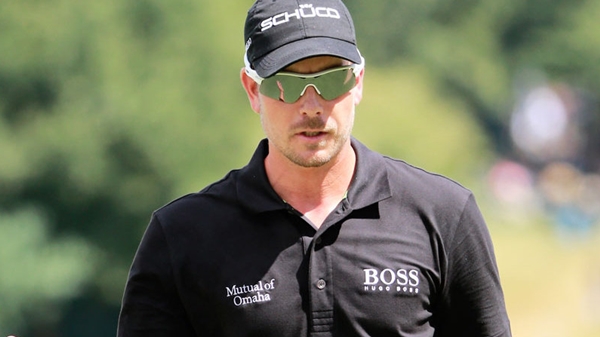 VIRGINIA WATER, England – Sweden’s Henrik Stenson heads into this week’s BMW PGA Championship knowing a few good rounds could take him all the way to the world No. 1 spot.

Stenson should manage the feat if he finishes higher at the European Tour’s flagship tournament than Australia’s Adam Scott does at the PGA Tour’s Crown Plaza Invitational Colonial event at Fort Worth, Texas.

But Stenson, currently the No. 3 in the world, is playing down his chances – having managed just one top-10 result in 10 straight appearances at Wentworth to 2010, the last time he played the course.

“It’s definitely on, but I haven’t given it too much thought in that sense,” Stenson said Wednesday. “I’ve been more trying to work on my game and try to get back in good shape because I know, if I get my game to where I want to have it, then that’s definitely an achievable thing in the near future.”

The permutations are also complicated by the fact that No. 4 Matt Kuchar could also become No. 1 should he win at Colonial.

Stenson knows that he may need to be patient.

“I’m more into trying to focus on the processes of playing good golf and giving myself the best chance to become world No. 1,” he said. “And if I can win some tournaments this year, I will have a good shot at getting there.”

Others in the field at Wentworth include US Open champion Justin Rose, Rory McIlroy and England’s Ian Poulter – though Poulter indicated he was only 70 percent certain of teeing up on Thursday after injuring his lower back last week in the gym.

“It’s just disappointing, and it’s not the best prep for this week,” Poulter said.

Rose, who will return the gleaming trophy to the United States Golf Association next week, shared a family moment involving the symbol of his Merion success over Phil Mickelson and his four-year old son.

The trophy will be displayed on the opening tee throughout the BMW PGA Championship.