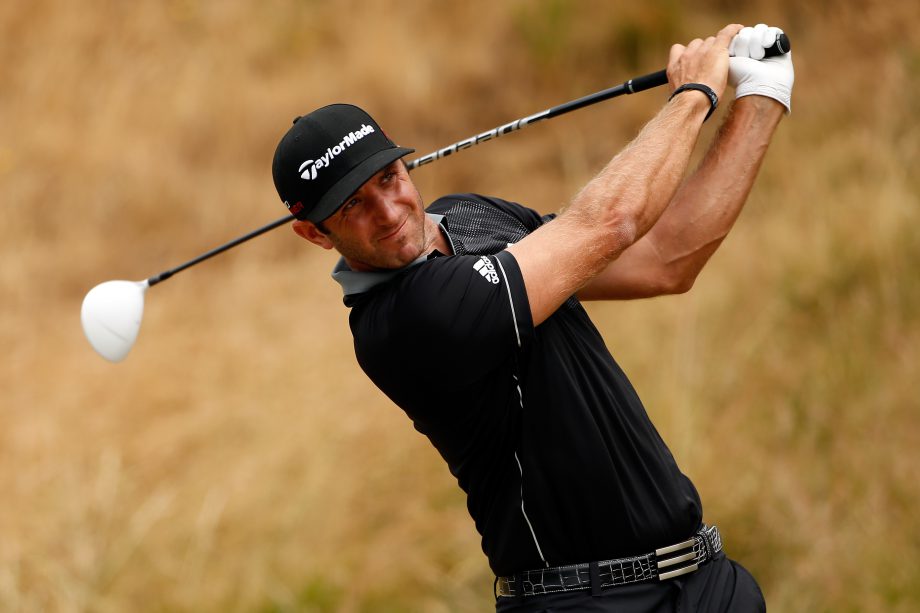 UNIVERSITY PLACE, Wash. — So much for Chambers Bay being the star of this U.S. Open. Thursday turned into another horror show for Tiger Woods.

Henrik Stenson and Dustin Johnson set the tone on the wild terrain of Chambers Bay, which made a relatively gentle debut. Both shot 5-under 65 and shared the lead.

And then came Woods.

He made bogey after bogey, from the bunkers and tall grass, until he ended this not-for-prime-time performance by topping a 3-wood from the 18th fairway that bounced over one bunker and disappeared into another. He wound up with an 80, his worst ever at the U.S. Open.

“I fought. I fought hard. And that was my number,” Woods said.

It was the third time this year he has shot in the 80s, only this time he had some company. Rickie Fowler played alongside him and shot 81.

Their scores were not a reflection of the conditions at Chambers Bay, the 8-year-old course on the edge of Puget Sound that was a mystery to so many players going into this U.S. Open unlike any other.

Johnson was flawless and powerful. His only mistake came on his final hole when he pulled a 6-iron on the par-3 ninth over the green and made his only bogey. Stenson, among the cynical of Chambers Bay when he first saw it, birdied four of his last five holes. He poured in a 25-footer on the 18th for his 65.

They had a one-shot lead over Patrick Reed.

Just over two dozen players managed to break par in the U.S. Open, the major where anything around par is considered a hard day of work. Masters champion Jordan Spieth was among those at 68. Phil Mickelson, going for the one major keeping him from a career Grand Slam, started strong and settled for a 69.

Rory McIlroy had a rough day. He was frustrated with the bumpy greens and shot 72.

Several tees were moved forward. Several pins were in spots where the slopes could be used to get the ball close. Complaints – except for the greens – were at minimum.

“My guess was there would be 20 to 30 guys under par after today, and by the end there will be barely any,” Geoff Ogilvy said after his 69. “With a course like this, I would have thought that would be a sensible strategy to keep us all happy on Thursday and then gradually wear us down.”

Woods wasn’t happy, though he managed a few laughs.

“The bright side is at least I kicked Rickie’s butt today,” he said.

Woods said he was on the right path with his new swing, but it was taking time and he was trying his hardest. That’s the message he gave at Memorial after his 85, yet his struggles were never more exposed than at the toughest test in golf, a major he had won three times.

From the side of a hill in deep, yellow grass, he hit one shot in which the club came out of his hand and landed some 15 feet behind him. That would have been an image that defined this day at Chambers Bay – until he got to No. 18 and hit a shot with which millions of hackers could identify.

Leave it to Woods to steal the show at the U.S. Open, even if he wanted to hide.

Chambers Bay showed off some of its nuances. Camilo Villegas took four shots to get out of a bunker on No. 12 that ruined his birdie-birdie start. Jason Day was motoring along toward the leaders until a stiff breeze showed up off Puget Sound and left his tee shot on the par-3 15th hole some 15 yards short of the green, buried in the sand just beyond a mound of tall fescue. Day still managed a 68.

“It’s only going to get tougher and tougher as the week goes on and everyone knows that,” Day said. “It’s all about the attitude. You have to have a good attitude in U.S. Opens. It’s easy to play yourself out of the tournament real quick here.”

The first time Stenson saw Chambers Bay, he walked the course without playing it. The Swede did just fine with clubs in his hand.

“One day out of four done, and we’re right there with where we want to be,” Stenson said. “It’s still a long journey until Sunday afternoon.”

Johnson lost a chance to win the U.S. Open at Pebble Beach five years ago with an 82 in the final round. He missed out on a playoff at the PGA Championship that same year by grounding his club without realizing he was in a bunker at Whistling Straits. And his challenge at the British Open in 2011 was derailed by a 2-iron that went out-of-bounds on the 14th hole.

But coming off a six-month break to get his life in order, Johnson is as imposing as ever. He already has won a World Golf Championship this year. And he likes the look of a big course where he can smash his way around it – and hitting it straight always helps.

“I really felt like I swung it well and hit a lot of quality iron shots,” Johnson said. “So the confidence is definitely there. I feel really good about where I’m at going into tomorrow.”

Two Canadians are in the field, Brad Fritsch fired an even par round to place him in a tie for 26, while David Hearn shot a 2-over par 72.