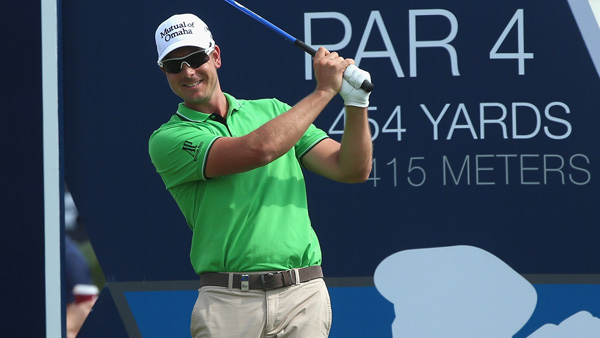 DUBAI, United Arab Emirates — Henrik Stenson birdied two of his closing three holes to seize a two-shot lead over Rory McIlroy and two others in the second round of the World Tour Championship on Friday.

Stenson’s 6-under-par 66 put him at 10 under overall in his bid to defend a title for the first time.

The top-ranked McIlroy (70), Scotland’s Richie Ramsay (69) and England’s Danny Willett (67) were tied for second on 8 under at Jumeirah Estates.

Stenson birdied his opening two holes, dropped a shot at the fourth, birdied the fifth, and picked up more birdies at 10, 13, 16 and the last. He finished in style despite admitting to hitting the wall at the 12th hole.

“I felt like I was running out of steam. It was difficult mentally from there on. I had to really focus hard and drag myself over the finish line. I’m pleased with that,” Stenson said.

Besides seeking his ninth title, Stenson is working to finish second in the Race to Dubai that he topped last year. McIlroy has already clinched the European money title and, following a six-week layoff, has his sights set on winning the tour finale for the second time in three years.

He moved to 8 under with a first-hole birdie but stalled with 10 straight pars and a 12th-hole bogey. McIlroy birdied the 14th and 15th holes, dropped a shot at 16, birdied the 17th, and found water on the last.

“I just didn’t quite have it today,” he said. “I grinded out a score, which was the main thing. I’m still in a good position.”

Rafa Cabrera-Bello of Spain shot the low round of the day, a 64 that included five birdies in as many holes to commence his round, and an eagle at 14. He was tied for fifth on 7 under, along with Justin Rose (66), Sweden’s Kristoffer Broberg (67), Denmark’s Thorbjorn Olesen (70), and Ireland’s Shane Lowry (71).

Lowry recorded the first hole-in-one in the six-year history of the event, and his first in pro competition when he aced the par-three, 13th.