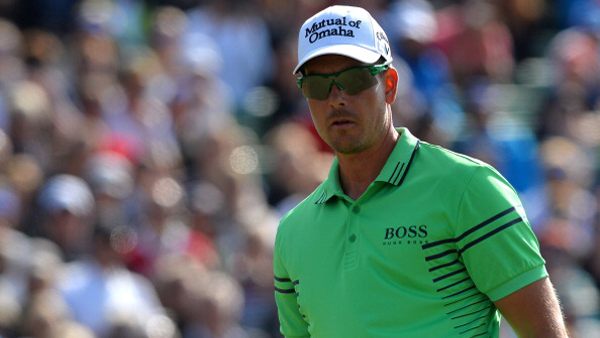 MALMO, Sweden – Second-ranked Henrik Stenson shot an 8-under 64 to share the third-round lead with England’s Eddie Pepperell at the Nordea Masters on Saturday.

Stenson had seven birdies along with an eagle on the seventh hole and a lone bogey, leaving the Swede at 13-under 203 on PGA Sweden National’s Lakes Course.

Pepperell shot a 65 that included eight birdies and one bogey.

Stenson is winless this year after sweeping the European Tour’s Race to Dubai and PGA Tour’s FedEx Cup last season.

“It would be huge to win at home in Sweden. I haven’t done that before so it’s something I really want to do. I’ve got a good chance, but there’s a long way to go,” Stenson said.

The highlight of the day was his 155-yard eight iron on the seventh hole.

“It was an awesome shot. I hit a lot of good iron shots last year, but none that went in so it was about time,” Stenson said.

Pepperell said he was excited to be sharing the lead with Stenson coming into the final day.

“Henrik is one of the best players in the world, he’s in fine form and it is his home country,” the Englishman said. “I couldn’t ask for much more really from a final round.”

Scotsman Stephen Gallagher (65) and Alvaro Quiros of Spain (66) were one stroke behind heading into the last day, while fifth-place France’s Victor Dubuisson shot a 67 for an 11-under total.