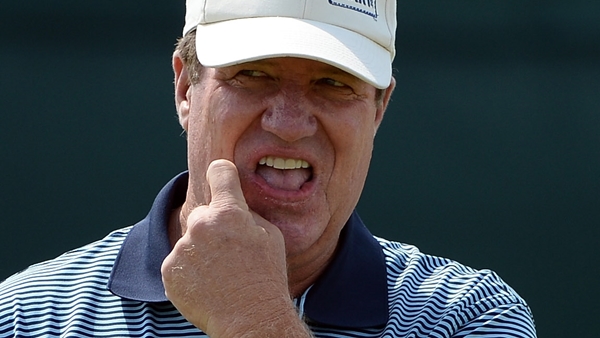 PALM BEACH GARDENS, Fla. – Former PGA champion Steve Elkington caused more outrage on Twitter on Tuesday when he made a disparaging remark about Missouri defensive end Michael Sam while trying to criticize media coverage that refers to him as gay.

Sam came out publicly two weeks ago. The NFL has never had an openly homosexual player. Sam worked out this week at the NFL combine in Indianapolis and is projected to be a mid- to late-round draft pick.

Elkington first tweeted that ESPN’s coverage of Sam was “embarrassing.”

He followed with this tweet: “ESPN reporting Michael Sam is leading the handbag throw at NFL combine … No one else expected to throw today.”

Elkington later deleted his tweet, and then tried to clarify his position. He posted a reply: “I’m for Sam I’m against ESPN telling me he’s gay….”

The PGA Tour suggested a fine was in order, though it has a policy of not announcing discipline.

“Under our regulations, conduct unbecoming a professional includes public commentary that is clearly inappropriate or offensive. With respect to this matter, and consistent with our longstanding policy, we do not comment on player disciplinary matters,” the tour said in a statement.

Elkington, an Australian who played college golf at Houston, has a cult following with his “Secret in the Dirt” cartoons depicting news from the world of golf, and he’s never bashful about poking fun at players.

But he has drawn ire on Twitter for some of his social commentary.

In November, he tweeted about the helicopter that crashed into a Glasgow pub and killed 10 people, “Helicopter crashes into Scottish pub. … locals report no beer was spilt.”

He was reprimanded by the European Tour last summer when he tweeted disparaging comments about the area around Royal Birkdale, where the Senior British Open was being held. He later tweeted that “couple caddies got rolled by some Pakkis, bad night for them.”

Elkington later apologized in a statement, saying he wasn’t aware that “Pakki” was an objectionable phrase in Britain, and that his comments were made out of frustration stemming from what had happened to a colleague.

Elkington won 10 times on the PGA Tour, including the PGA Championship in 1995 at Riviera for his only major.