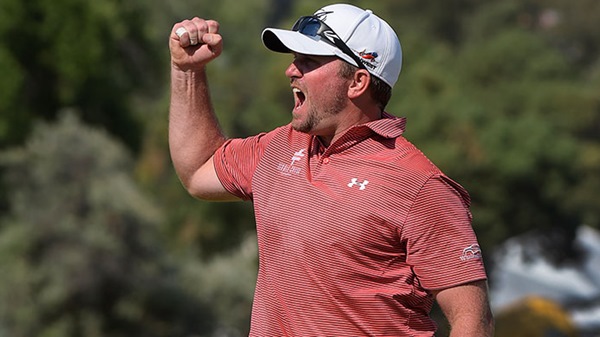 The pair battled back and forth at Hillcrest Country Club and were tied at 24 under after regulation play.

Wheatcroft watched as Alker’s 30-foot birdie try stopped a couple feet short of the cup and then stepped up and made his putt.

“This is unbelievable. I’m just speechless,” said the 36-year old from Jacksonville, Florida, who won for the second time in his career. “I’ve been playing so badly this year that I thought I might be done. I lost all belief.”

Wheatcroft rediscovered his game at last week’s Utah championship where he finished tied for 21st after opening with rounds of 65-66.

“There’s something about this place,” said Wheatcroft, runner-up to Luke Guthrie here in 2012.

“It started to sink in a few weeks ago that if I didn’t start playing better I’d have to find something else to do. I knew I had to keep fighting and I had some good tournaments ahead of me. I really thought I was going to win this week.”

Wheatcroft started the final day two shots back of Alker, who broke the tournament’s 54-hole record with a 20-under 195 total.

Rookie Justin Thomas put a charge on late and posted a 65 to reach 22 under, good for third place.

The victory for Wheatcroft vaulted him from No. 89 to No. 11 on the money list and guaranteed him a return trip to the PGA Tour in 2015.

“I’ve had an awful year and now I’ve had two good weeks and now it’s a good year,” Wheatcroft said. “With a baby on the way you worry about where the money is going to come from. That check is going to pay for a lot of diapers.”

Canada’s Nick Taylor was the leading Canadian. He finished tied for 15th at 15-under 269.