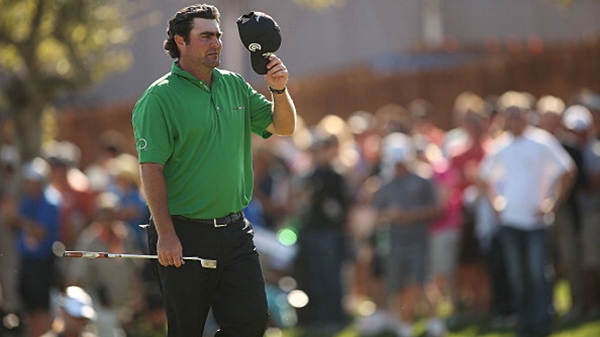 SAN ANTONIO – Steven Bowditch held on to win the Texas Open in windy conditions Sunday for his first PGA Tour victory and a spot in the Masters.

The 30-year-old Australian bogeyed the par-5 18th for a 4-over 76 – the highest closing score by a winner since Vijay Singh finished with a 4-over 76 in the 2004 PGA Championship – for a one-stroke victory.

“I’m over the moon,” Bowditch said. “I really can’t believe it.”

Chesson Hadley and Ryan Palmer missed chances to get into the Masters through the top 50 in the world ranking. Hadley, the Puerto Rico Open winner, needed at least a sixth-place finish, but closed with an 80 to tie for 56th at 5 over. Palmer needed a top-three finish and had an 82 to also tie for 56th.

Bowditch entered the week 339th in the world and had only two top-10 finishes in eight years on the tour in a career marked by bouts of depression. He won once on the Australasian circuit and twice on the Web.Com Tour.

On the par-3 16th, he got up-and-down after missing the green. He pushed his drive on the par-4 17th, hit his approach on the green and two-putted, then pulled his tee shot left on 18, recovered with a shot to the fairway and reached the green in three.

“I just drew back on some experience,” Bowditch said.

MacKenzie made a 13-foot birdie putt on the 17th to pull within a stroke of Bowditch, but the Australian tapped in from 2 feet for his birdie at No. 14 to push the advantage back to two.

Matt Kuchar and Andrew Loupe shot 75s to tie for fourth at 6-under.

Calgary’s Stephen Ames finished tied for 16th at 1-under 287. The result is his best finish since the 2012 Mayakoba Golf Classic, where he also tied for 16th.