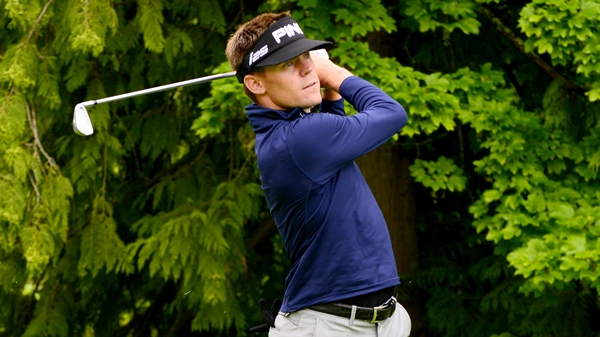 (Saskatoon) – Arkansas’ Drew Stoltz cruised to a 9-under 63 at Dakota Dunes Golf Links on Thursday to take a two stroke lead after the first round of the SIGA Dakota Dunes Open presented by SaskTel.

The 29-year old Arkansas native carded nine birdies, an eagle and two bogeys for the round, playing the par-5s in 5-under. While the field scoring average rose to 74.20, Stoltz’s career-best round on PGA Tour Canada gave him the lead by two over Michigan’s Matt Harmon, who finished shortly after Stoltz with a 65, and by four over Calgary’s Ryan Yip, who finished tied for second here last year and posted a 5-under 67.

“If you would have told me I shot this score this morning, I probably wouldn’t have believed it,” said Stoltz.

Winds gusting north of 50 km/h firmed up the course and challenged players on the links-style layout, a stark change from last year’s birdie-filled opening round when the field averaged 69.858 – the best scoring average by the field to par in any round on PGA Tour Canada in 2013.

“When I got here today, the wind was blowing a lot harder than it did yesterday,” said Stoltz. “It played completely different. I really didn’t know what was going to be a good score, but I turned in 3-under and made a few more, and all of a sudden I was looking at a really good score.”

With two cuts made in three starts on the season, Stoltz currently sits 81st on the Order of Merit and is hoping to cash in on a big week at Dakota Dunes. The former Texas Christian University Horned Frog said he knows he’ll need a handful of standout finishes to achieve the ultimate goal of finishing in the top five on the Order of Merit and advancing to the Web.com Tour.

“The way it’s structured out here, if you can get hot a couple of weeks and get a win or two, that’s kind of what it’s all about,” said Stoltz. “Your good weeks need to be great weeks and that’s kind of the key to getting through.”

Stoltz is making a return to PGA Tour Canada this year after a successful 2013, when he won the Metropolitan Open in Missouri and claimed another win on the All-American Gateway Tour. He earned conditional status at the 2014 California Qualifying Tournament.

One shot behind Yip was a quartet of players including Montreal’s Beon-Yeong Lee, who earned an RBC Canadian Open spot two weeks ago in regional qualifying, as well as Thornhill, Ont.’s Ben Silverman, Washington’s Brock Mackenzie, and Florida’s Jeff Corr.