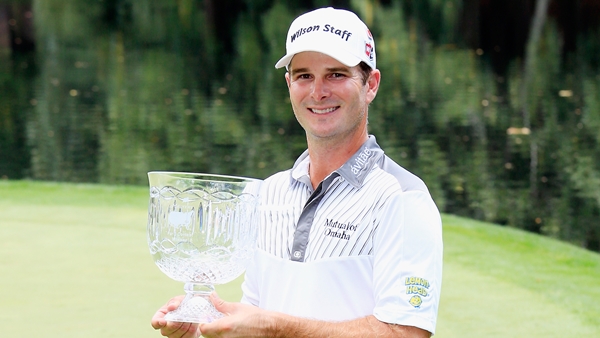 AUGUSTA, Ga. – Kevin Streelman beat Camilo Villegas on the third hole of a sudden-death playoff Wednesday to win the Par 3 tournament on the last day to relax at Augusta National.

Streelman and Villegas finished the nine holes tied at 5 under. They each opened with a par then a birdie before Streelman topped Villegas, who had not one, but two holes-in-one through his first eight holes.

Streelman, who played at Duke, tied for 42nd last year in his best finish in three appearances at the Masters.

Winning the Par 3 contest has been considered a bad omen since no one has won both that title and the Masters in the same week. Streelman called it a fun day where his focus was on helping Ethan from the Make-a-Wish Foundation have a great day.

“Done all I can do,” Streelman said. “Now I’ve just got to go out and have fun and play.”

Villegas got his first ace on No. 4 along with Jack Nicklaus and Matias Dominguez of Chile. The Colombian followed that with his second hole-in-one of the day on the 120-yard No. 8, taking him to 5-under 22 and tying Streelman.

Holes-in-one are nothing new for Villegas who had the 14th of his career last week at home with a 5-iron. He said his pitching wedge on his first hole-in-one Wednesday kept trickling back and went in the hole. He used a 54-degree wedge on his second ace.

“The second one, we were a little more emotional there,” Villegas said. “We just kind of jumped. Enjoying it man.”

Tiger Woods had company playing the Par 3 for the first time since 2004. His 6-year-old son, Charlie, and 7-year-old daughter, Sam, caddied for him with girlfriend, Olympic skiing champion Lindsey Vonn, joining them. Woods even let his daughter handle his putting, and she showed a deft touch on the green.

“I’ll always have memories of my pop at Augusta and now Sam & Charlie,” Woods wrote on Twitter. “An amazing day.”

Family time is the best part of this event.

“Definitely the best part was carrying my son, six-month-boy, all over showing him off to the crowd,” Todd said.

Nicklaus, the six-time Masters champ, looked like he just might win his first Par 3 title at the age of 75 after a hole-in-one on No. 4.

His iron shot bounced twice before taking a little hop spinning back into the hole. Ben Crenshaw and Gary Player each congratulated Nicklaus, and he celebrated with a double first-pump. Fans roared for a shot that got Nicklaus on the leaderboard before a 5-over finish.

There were five aces Wednesday in all.

Canada’s Corey Conners didn’t record an ace, but he did fare quite well. The Listowel, Ont., native and Team Canada member tied for 6th at 3-under.