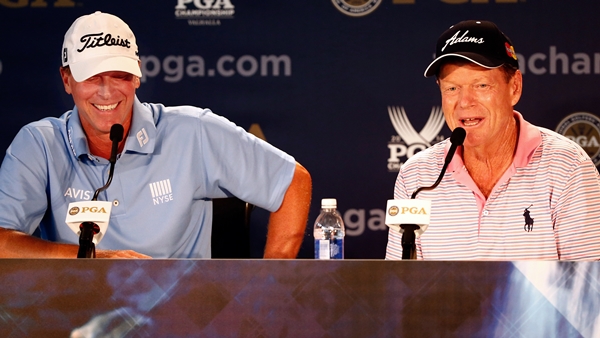 “I feel old,” Stricker said shortly after the announcement was made at Valhalla Golf Club, where he’s playing in the PGA Championship. “The way my body feels make feel old, too.”

The 47-year-old Stricker played on the last three U.S. teams. But watching from the sidelines this time won’t diminish his desire for revenge. He was left standing on the 18th green at Medinah in 2012, when Martin Kaymer of Germany sealed the win for Europe with a putt for a 1-up win in the match.

“There’s a bunch of guys who want to try to get that cup back,” Stricker said.

He joins Raymond Floyd, 71, and fellow Wisconsin native Andy North, 64, as Watson’s assistants. Given his friendship with North, Stricker was asked how the two would divvy up responsibilities when the matches are contested Sept. 26-28 at Gleneagles in Scotland.

Stricker also played five times at the Presidents Cup, where his low-key personality made him a good match and frequent playing partner for Tiger Woods. Though he was also part of Woods’ foursome during Wednesday’s practice, Stricker never mentioned being selected as an assistant.

“He didn’t tell me,” said Woods. “I guess he was focused on his game.

“I think it’s great,” added Woods, who is still angling for a spot on the Ryder Cup team as a wild-card pick. “Because Strick is not only a good guy, he’s also one of our peers. … I think it’s important to have someone who is out here on a regular basis, who knows the guys, knows their personalities, knows their games inside and out. I think that’s well deserved.”

For his part, Stricker said twice that he wanted Woods on the team – provided his oft-injured back isn’t a problem.

“We know how important he is in the game of golf, and how good a match play player he is; when you really do need him, he’ll be there,” Stricker said. “So we’ll see. We’ll see how it plays out this week. Hopefully he’s healthier and he can get his game going.”

In making the announcement, Watson, who turns 65 next month, couldn’t help tickling his newly named assistant on the age issue.

When someone pointed out to Watson that Stricker was “obviously of a different generation to the other two vice captains that you’ve selected,” the captain cut the question off.

Turning to Stricker, he said, “Are you a different generation than North?”

“A couple generations,” Stricker replied, to a round of laughter.