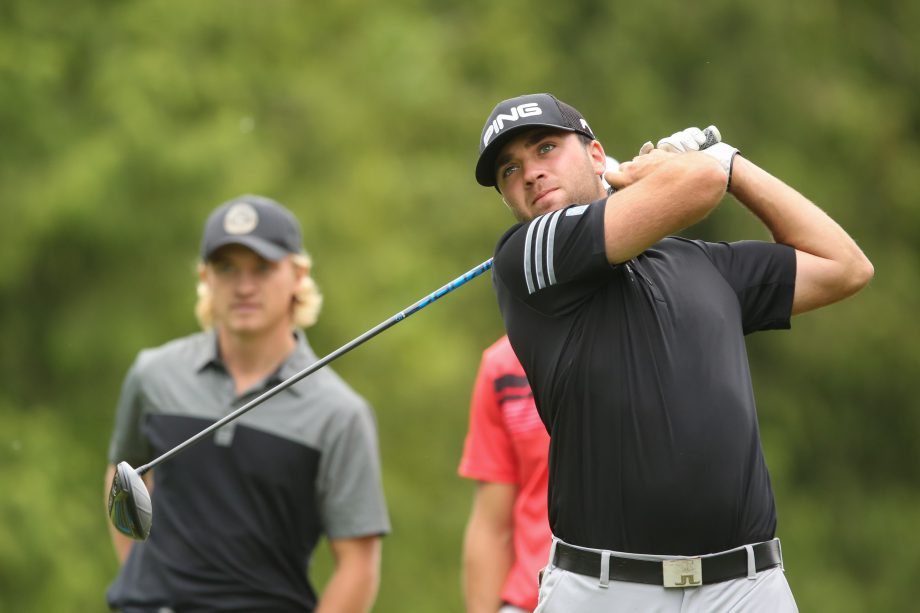 The 23-year old turned a slow start around with a blistering stretch of eight birdies in 10 holes and closed the round with a birdie 18 to reach 19-under through three rounds, two strokes ahead of Wilmer, Alabama’s Robby Shelton heading into Sunday.

“The putter started to heat up on the back nine a little bit, and once I started to make some putts it gave me some confidence that I didn’t need to hit it super close any more,” said Ruiz. “I hit a few to about 15 feet and got some of them to fall in.”

Ruiz, a winner earlier this year at the Staal Foundation Open presented by Tbaytel, began the day two strokes off the lead held by Georgia’s Scott Wolfes and found himself at 2-over par through five holes. After a birdie at No. 6, however, he produced a remarkable stretch that included five straight birdies on holes 8 through 12 to surge into the lead.

Entering the week at No. 4 on the Order of Merit and presented with a chance to secure his spot in The Five, Ruiz acknowledged the opportunity in front of him on Sunday but said he would do his best to remained focus on the task at hand.

“I’ve done a lot this year, but I’m still four on the money list and the goal is to be top five and I’ve got to play well tomorrow. I’m definitely not getting ahead of myself, and hopefully I’ll go have a fun day tomorrow and play well and we can talk about that after next week,” said Ruiz.

Shelton, also a winner earlier this year at the GolfBC Championship, birdied the 18th to shoot a 65 of his own, while Florida’s Lee McCoy was in solo third at 16-under after a 3-under 69.

23-year old Johnny Ruiz is making his 10th career start on the Mackenzie Tour. Earlier this year, he earned exempt status for the first eight events of the season with a T2 finish at the British Columbia Q-School and has since recorded three top-10 finishes, including his first Mackenzie Tour win at the Staal Foundation Open last month.

Thanks to his win, Ruiz moved into second on the Mackenzie Tour Order of Merit and earned an exemption into the 2017 RBC Canadian Open. He missed the cut by one stroke. Ruiz ranks fourth on the Order of Merit heading into this week.

Ruiz did not begin playing golf until age 14 and notched his first pro win at the 2016 Monterey Open.

22-year old Robby Shelton is making his eighth career start on the Mackenzie Tour this week. The former University of Alabama standout ranks second on the Order of Merit thanks to a win at the GolfBC Championship runner-up finishes at the Players Cup and Cape Breton Open.

As an amateur, Shelton was consistently among the top players in college golf.

helped the Crimson Tide to the 2014 National Championship and was named a 1st team All-American in each of his three seasons.

Shelton finished third at the 2015 Barbasol Championship on the PGA TOUR, the

University of Georgia alum and former NCAA All-American Lee McCoy is making his 11th career start on the Mackenzie Tour. Earlier this year, he set the record for largest margin of victory during the PGA TOUR era on the Mackenzie Tour with an eight-stroke win at the Freedom 55 Financial Open. McCoy ranks sixth on the Order of Merit heading into the week.

In 2016, he thrilled hometown fans in Palm Harbor, Florida by finishing solo fourth as an amateur at the Valspar Championship on the PGA TOUR.

“I saw Patrick (Newcomb) up there, Robby, Lee and Johnny. They’re all playing well, which means I need to step up my game, because I haven’t secured anything. There’s two events left and I think it gave me a little extra motivation seeing those guys play well. I knew I had to play well today and thankfully I was able to get the putter rolling and come in with a good score.” – Order of Merit leader Kramer Hickok, who shot an 8-under 64 on Saturday.

“I always enjoy playing with Rob, and I really enjoyed playing with Johnny today. It’s a little bit of both ways because it is always great to play with great players, but I’m trying to beat probably two of the best players in the field, so it’s gonna be tough but I’m looking forward to the challenge. If it’s anything like the Johnny Ruiz session that I watched today, it’s going to be tough, but I think I’ve still got some good golf left.” – Lee McCoy on the challenge of competing for the title on Sunday.