Need help with an outside agency? 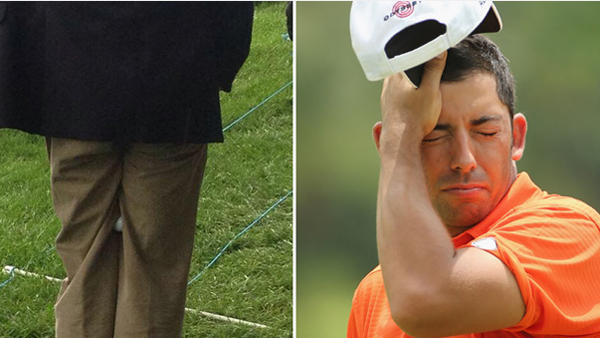 Earlier this season we looked at how outside agencies became involved on the PGA and Web.com Tours, with players seeking assistance from Rule 18-1 – Ball at Rest Moved by an Outside Agency. In those situations, players and Tournament Officials were fortunate to have television evidence at their disposal to help determine the original location of the competitor’s balls.

More recently, a situation occurred at the BMW PGA Championship overseas where Pablo Larrazabal’s ball came to rest on an outside agency – while there was plenty of media coverage via television and social media, the evidence spoke for itself when Larrazabal reached the location of his ball.

Larrazabal’s approach to the 18th green found it’s way between the pant legs of a spectator and remained there at rest. While the ball came to rest on the spectator, who is deemed to be an outside agency, and contrary to the Rules used in the filming of Happy Gilmore, Larrazabal was not required to ‘play the ball as it lies’.

Under Rule 19-1 – Ball in Motion Deflected or Stopped by an Outside Agency, Larrazabal was able to obtain relief, without penalty, in this situation. Rule 19-1, in part states the following:

If a player’s ball in motion is accidentally deflected or stopped by any outside agency, it is a rub of the green, there is no penalty and the ball must be played as it lies, except:

a) If a player’s ball in motion after a stroke other than on the putting green comes to rest in or on any moving or animate outside agency, the ball must through the green or in a hazard be dropped, or on the putting green be placed, as near as possible to the spot directly under the place where the ball came to rest in or on the outside agency, but not nearer the hole…

Due to the fact that the ball was not touching part of the golf course when it came to rest through the green, Larrazabal was required to drop the ball as near as possible to the spot where the ball originally lay. Unfortunately, Shooter McGavin did not have the same relief option available to him in his closely contested game with Happy Gilmore.

Do you have a situation involving the Rules of Golf you’d like to see discussed, clarified or answered? If so, email us here and we’ll try to include your inquiry in a forthcoming Rules and Rants Blog. To simply ask a Rules of Golf question to one of our Experts, please click here.