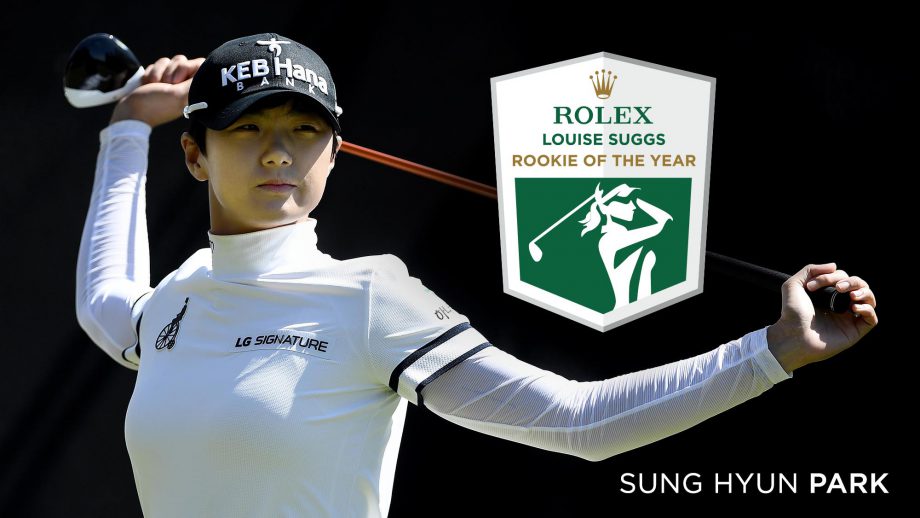 DAYTONA BEACH, Fla., – The LPGA Tour today announced that 24-year-old Sung Hyun Park, of the Republic of Korea, has mathematically clinched the 2017 Louise Suggs Rolex Rookie of the Year award with five events remaining on the season’s schedule.

Park, who won the 2017 U.S. Women’s Open Championship for her first LPGA and major victory, has a 798-point lead over Angel Yin which would mark the third-largest margin of victory in the history of the award, passing 2016 winner In Gee Chun (778 points) and trailing only Karrie Webb over Mayumi Hirase in 1996 (1030 points) and Se Ri Pak over Janice Moodie in 1999 (929 points).

“I am honored to receive this award which was one of my goals from the beginning of the season,” Park said. “This is really special because you only get one chance in a lifetime. Taking this opportunity, I want to be a better player.”

In July, Park rallied from three strokes behind after three rounds to pull off a victory at the U.S. Women’s Open, becoming a Rolex First-Time Winner and capturing her first major title. The following month, Park earned her second career win with a four-stroke rally at the CP Women’s Open. She has six additional top-10 finishes in 2017, with no showing worse than 43rd, and finished in the top 20 at four of the season’s five major championships.

Through October 15, Park leads the LPGA in Official Money with $2,092,623, making her the fastest player in LPGA history to reach $2 million in career earnings at 7 months, 13 days (19 starts; 2017 LPGA KEB Hana Bank Championship). She was also the fastest to reach $1 million in career earnings following her U.S. Women’s Open victory at 4 months, 14 days (14 events).

Park also sits in the top 10 in Scoring Average (first), Race to the CME Globe (second), Rolex Player of the Year (third), Birdies (sixth), Driving Distance Average (ninth) and Greens in Regulation (sixth). She is currently No. 2 in the Rolex Women’s World Golf Rankings, less than one point behind No. 1 So Yeon Ryu.

Park is currently on leave from Hankuk University of Foreign Studies, where she is majoring in International Sports and Leisure. After taking up the game in the second grade at her mother’s suggestion, Park joined the KLPGA Tour in 2012 at the age of 19. She earned her first win on the KLPGA in 2015, and captured 10 total victories before joining the LPGA Tour in 2017.

Park will receive the Louise Suggs Rolex Rookie of the Year award at the 2017 Rolex LPGA Awards ceremony, to be held Thursday, Nov. 16, in conjunction with the season-ending CME Group Tour Championship.

About the Louise Suggs Rolex Rookie of the Year Award

In 1992, a point system was instituted. LPGA Tour rookies are awarded points at each official LPGA tournament based on top 40 finishes and positions 41 through each player making the cut receive 5 points each. All points are doubled at LPGA major championships.