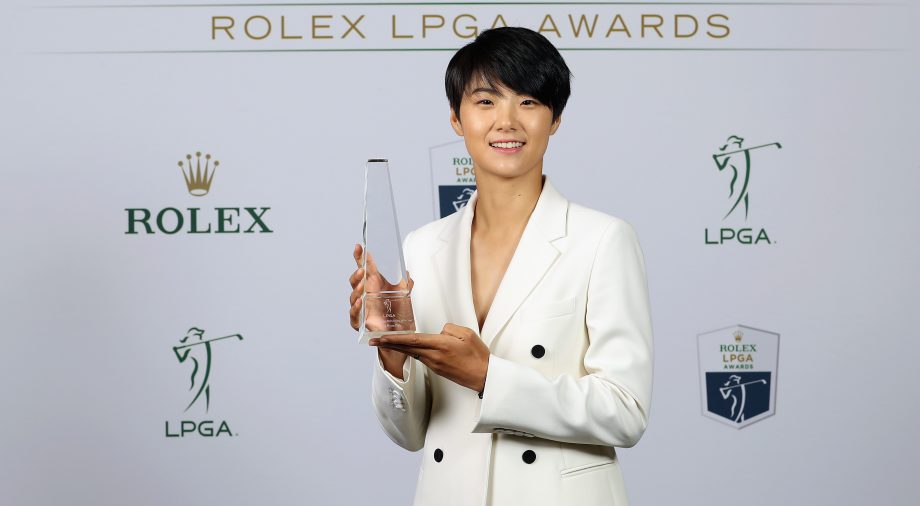 NAPLES, FLA – Korea’s Sung Hyun Park received her trophy as the LPGA Tour’s top rookie of 2017 at a ceremony in Florida on Thursday.

Park was presented with the Louise Suggs Rolex Rookie of the Year trophy during the LPGA ceremony at the Ritz-Carlton Golf Resort. It was held after the opening-round of the LPGA’s season-ending CME Group Tour Championship.

Park actually clinched the points race for the top rookie honors in mid-October. She had opened a 1,413-615 lead over Angel Yin of the United States with five tournaments remaining. Rookies earn 150 points for each victory, which is doubled for majors and the CME Group Tour Championship. Yin was only scheduled to play four more events at the time and wouldn’t have been able to catch Park.

The 24-year-old former Korea LPGA star won the U.S. Women’s Open for her first LPGA win and her first major in July, and she followed up with a win at the CP Women’s Open in August.

She became the first rookie to reach No. 1 in the world rankings last week, but her reign lasted just one week, as Feng Shanshan of China soon brought her down to No. 2.

Heading into CME Group Tour Championship, Park was leading the LPGA in money and was in second place in scoring average. She was also in third in the Player of the Year points race, within striking distance of the current leader, Ryu So-yeon of South Korea.

No rookie has won the money title, scoring title, Player of the Year and Rookie of the Year in the same year since Nancy Lopez in 1978.