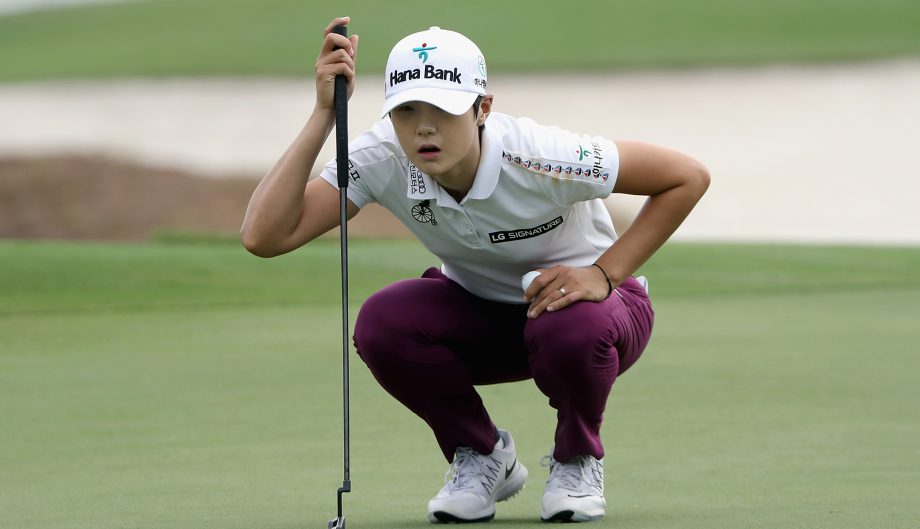 NAPLES, Fla. – Golf felt so easy to Sung Hyun Park that only when she took out her card to catch up on her scores did she realize she had closed out the front nine with five straight birdies at the CME Group Tour Championship.

The 24-year-old from South Korea added a 30-foot eagle putt late in her second round and finished with a 7-under 65, giving her a three-shot lead going into the weekend at Tiburon Golf Club.

Nothing seems to bother her, even the chance to cap off an amazing rookie season by sweeping all the big awards on the LPGA Tour.

Leave that to the players chasing her.

Even with a three-putt bogey on the final hole, Park was at 12-under 132 and was three shots clear of Caroline Masson (66) and Sarah Jane Smith (69).

More importantly, none of the other players in the chase for the $1 million Race to the CME Globe bonus or any other big award was within five shots of Park, who is trying to become the first rookie since Nancy Lopez in 1978 to win LPGA player of the year.

Lexi Thompson, who leads the Race to the CME Globe and the Vare Trophy for lowest adjusted scoring average, shot a 67 and wound up losing ground. She was six shots behind and must stay within 10 shots of Park to win the Vare.

So Yeon Ryu, who leads the points-based award for player of the year, managed a 71 with her sore right shoulder but was 11 shots back.

The other two players who need to win the tournament to collect the $1 million bonus also had their work cut out for them. Brooke Henderson of Smiths Falls, Ont., had another 70 and was eight shots behind, while world No. 1 Shanshan Feng shot 73 and was 11 shots behind. Hamilton’s Alena Sharp was 5 over.

Park was in control, only she didn’t see it that way.

“I don’t think it’s quite that far of a lead,” Park said. “Two, three shots of a lead can change at any moment. We will have to see what’s in store for this weekend.”

Park began her big run with an 18-foot birdie on No. 5, got up-and-down for birdie from just off the green at the par-5 sixth, holed a 25-foot birdie putt on No. 7, and then closed out the front nine with birdie putts from 8 feet and 15 feet.

“I actually didn’t know that I was going five birdies in a row,” Park said. “Come hole No. 10, I realized that I hadn’t been jotting down my scores as diligently, and so I realized it a little bit later on. And it felt great.”

That gave her the lead by one shot over Suzann Pettersen, except that Pettersen faded badly on the back nine.

Pettersen dropped four shots in a three-hole stretch by getting out of position off the tee and she shot 39 on the back nine for a 70 to fall five shots behind.

“I feel like I’m playing good,” Pettersen said. “Three bad drives on the back nine cost me four shots. That should not be possible on this course, where the fairways are about 100 yards wide.”

Park was honoured at an awards banquet Thursday night as the LPGA rookie of the year. Now, she has more awards in her sights. A victory would give her the award for player of the year. She would capture the money title, which she leads over Ryu. And depending on how the weekend goes, she might be able to surpass Thompson in the race for the Vare Trophy.

Thompson did well to recover from two bogeys on her opening three holes.

“I hit a few really erratic shots in the beginning. It wasn’t a good start to the round,” Thompson said. “Just tried to stay positive and find something that could work for the last 14, 15 holes.”

Lydia Ko fell six shots behind in her bid to avoid a winless season. She was one shot behind going into the second round but managed only three birdies in her round of 71.

Park, meanwhile, had everything going her way. Even when she pulled her drive on the par-5 14th into a sandy area with a root next to her ball, she picked it clear and sent it through a goal post of trees back to the fairway. Three holes later, she blasted a drive and had only a 7-iron into the green at the par-5 17th, which she hit to 30 feet and made the long putt.

Does anything make her nervous?

“I hate spiders,” she said. “But in terms of golf, I always get nervous to this day on the first tee. I can feel my heart pounding.”

It’s a feeling that doesn’t appear to last very long.