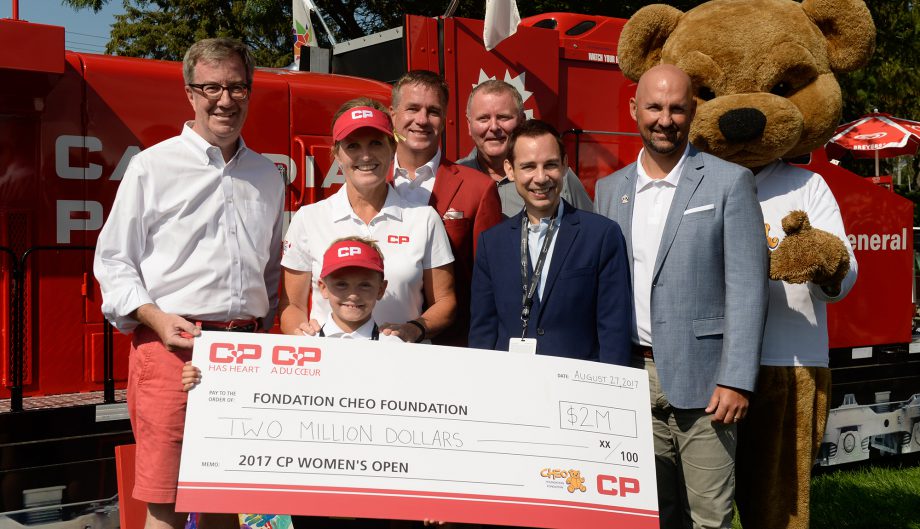 ​Thanks to a masterful weekend performance, Sung Hyun Park has won the Canadian Pacific Women’s Open and helped young patients seeking care at the Children’s Hospital of Eastern Ontario (CHEO) in the process. Park shot 13 under par on her way to the victory and Canadian Pacific (CP) made a $2 million donation to a renovated catheterization lab and interventional suite at CHEO.

The total donation is the result of several fundraising efforts of the CP Has Heart campaign. Through CP Birdies for Heart, CP contributed $5,000 for each birdie made by a player on the 15th hole during tournament play. A total of 45 birdies represents a $225,000 donation. CP also matched all donations made online at www.cheoheart.com  from April 1 to the end of the tournament.

“I have not been to a golf tournament before that had this level of support from the community and the fans,” said Keith Creel, CP President and Chief Executive Officer. “It was a privilege to watch Sung Hyun Park lead the field of world-class talent, including CP ambassadors Brooke Henderson and Lorie Kane, while simultaneously supporting CHEO’s important work. CP supports the cause of heart health because it’s an issue that touches so many Canadians. As part of ongoing Canada 150 celebrations, it’s our honour to leave a lasting charitable legacy here in the nation’s capital.”

To celebrate Canada’s sesquicentennial, CP launched the Beautiful Hearts campaign this year. In addition to the CP Women’s Open donation to CHEO, CP is sponsoring the Canadian Football League regular season, playoffs and the Grey Cup in Ottawa. That sponsorship will support the University of Ottawa Heart Institute.

Both of the Ottawa-based organizations CP is supporting with its Beautiful Hearts campaign are offering lifesaving care to Canadians who suffer from heart ailments. Children with congenital heart defects that benefit from CHEO’s work will later go on to receive care from the Ottawa Heart Institute.

“The CP Women’s Open coming to Ottawa is an incredible boost for our region, and all of us at CHEO are incredibly thankful that CP chose CHEO as the beneficiary of the CP Has Heart program,” said CHEO Foundation President and CEO Kevin Keohane. “The CP Has Heart campaign will help the doctors, nurses and staff provide the best care possible for patients and families at CHEO. CP, the LPGA, Golf Canada, the Ottawa Hunt and Golf Club, and the community have come together to support CHEO’s patients and for that we can’t thank them enough.”

CP ambassadors Lorie Kane and Brooke Henderson also contributed to the CHEO donation by participating in the Monday Brooke and Friends pro-am. Proceeds from the pro-am were split between the Golf Canada Foundation and the Team Henderson Foundation. Henderson also announced that her foundation will give back $5,000 to CHEO.

“On behalf of all the players this week, especially the Canadian contingent, I want to thank the fans and the community for the support,” said Smiths Falls, Ontario’s Brooke Henderson, the top Canadian at 7 under par and the new course record holder at Ottawa Hunt with her Saturday 63. “Joining Lorie as a CP ambassador and seeing the long-term impact of CP’s sponsorship of this tournament has been a privilege. A huge thanks to everyone who donated to CHEO and to CP for bringing the tournament and their charitable legacy to Ottawa.”

The 2018 CP Women’s Open will be played at the Wascana Country Club in Regina. For more details, visit www.cpwomensopen.com.