Rory McIlroy wary of all the hype entering PGA Championship 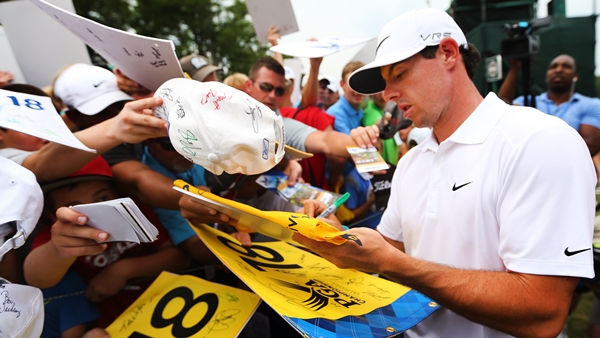 LOUISVILLE, Ky. -Golf stories about Rory McIlroy are a lot more flattering than those a year ago. And if he reads too much into them, they can be a lot more dangerous.

McIlroy went wire to wire at Hoylake to win the British Open. Then, he overpowered Firestone on the weekend to win his first World Golf Championship. Now he is the overwhelming favorite at the PGA Championship. He is looked on in some corners as a sure thing, a label once reserved only for Tiger Woods.

Boy Wonder is not so sure about that.

“Sometimes I feel that people are too quick to jump to conclusions,” McIlroy said Tuesday before heading out for his first look at Valhalla. “I’ve had a great run of golf and I’ve played well over the past few months. Look, I said at the start of the year that golf was looking for someone to put their hand up and sort of become one of the dominant players in the game. I felt like I had the ability to do that. And it’s just nice to be able to win a few tournaments and get back to where I feel I should be.”

He is No. 1 in the world again. He has three wins in his last seven starts. And with three legs of the career Grand Slam – only Woods and Jack Nicklaus were younger than the 25-year-old McIlroy when they achieved that – there was even talk about the start of a new era.

“I’m just really happy with where my golf game is at the minute, and I just want to try and continue that for as long as possible,” he said. “And people can say what they want to say. That’s fine. But I can’t read too much into it. … Because if you read everything that was being written, I’d turn up at the first tee on Thursday thinking I’d already won the tournament.”

The question lingered Tuesday whether Woods was going to make it to the first tee at all.

Woods injured his back Sunday – just four months after back surgery – and canceled his news conference Tuesday. There was no word on his prospects, presumably because he wanted to give himself as much time as possible to see if he could play.

Even if he did, that wouldn’t take the focus from McIlroy.

McIlroy appears to be in full flight, just as he was in his record victory at Congressional in the 2011 U.S. Open, and just as he was when he won the PGA Championship by a record eight shots in 2012, and then added three more wins the rest of the year against strong fields.

Valhalla, where Woods won 14 years ago, would appear to be suited for him. Then again, just about any course is for a guy who hits it long and straight.

McIlroy said his work in gym has added about 7 pounds of muscle in recent months, and he is now the heaviest he has been. He also has shortened his swing, which would make him more accurate off the tee.

“He’s such a great driver of the golf ball,” Phil Mickelson said as he looked back on McIlroy’s win at Firestone. “Even though the golf course was fairly tight and hitting fairways is important, he kept hitting drivers and he kept putting the ball in play and he kept playing the course aggressively and making birdies. And he plays to his strength. He’s just a very good talent. We’ve been waiting a year, year and a half now for it to turn. And it’s really turned for him. And he’s tough to beat.”

McIlroy was foundering at this time a year, missing the cut in three out of six tournaments, not even sniffing contention as he worked through equipment changes. The final touch was an alignment issue he solved after the Masters, and he is soaring now.

McIlroy ended Adam Scott’s 11-week run at No. 1, and his intent is to stay there.

“I think the right guy is at No. 1 at the moment,” Scott said. “I hope that I could go ahead and win this week and maybe go back to No. 1. But there’s no doubt Rory has played the best golf over the last few months.

“It’s only motivating to see Rory play so well,” he said. “I’ve said a lot that I feel this is my time, so I’ve got to beat whatever Rory is throwing out there.”

McIlroy considers this his best major, and the results bear that out. In five starts, he has finished out of the top 10 only one time. That was in 2011 in Atlanta, where he played the last three rounds with an arm injury after trying to hit a shot through a tree root.

Golf courses typically are softer in August because of the heat. Nicklaus courses tend to have generous fairways, not that McIlroy needs any help these days. The only change now is the perception.

“Expectations are higher. Hype is a little higher,” McIlroy said. “So it’s a little bit different this year.”