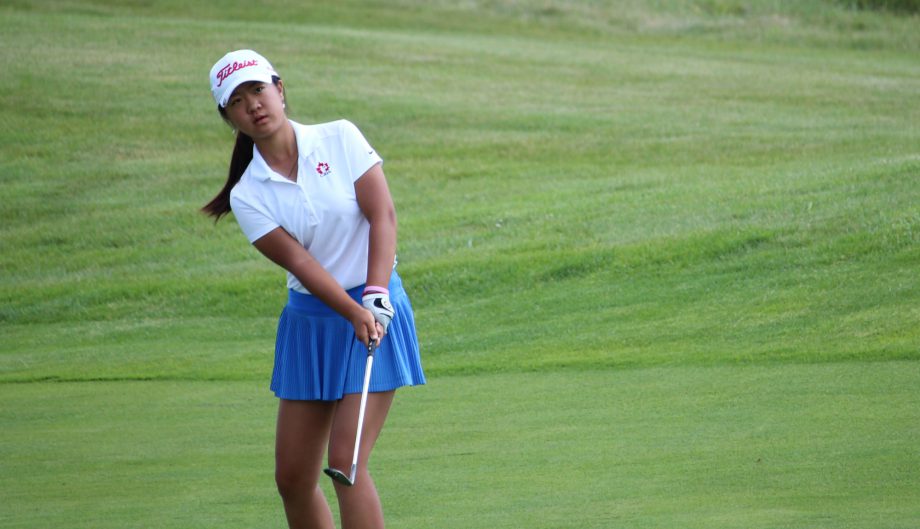 After round two wrapped up Thursday morning, Susan Xiao from Surrey, B.C., carded a 1-under-par 71 in the afternoon to take the lead at 2 under par after three rounds of the Canadian Junior Girls Championship at Camelot Golf and Country Club.

Xiao, the leader after round one, had three birdies and no blemishes on her card other than a double-bogey on No. 13.

She leads by one-shot over London, Ont., native Ellie Szeryk who fired 1-over-par 73 on Thursday, recording her first over par round of the tournament to sit at 1 under par through 54 holes.

“My approach shots were good today,” said Xiao. “And my putting, although I lipped out a few birdie putts, overall it was good today.”

Heading into the final round as the leader won’t weigh on Xiao’s mind tonight. She plans on keeping an even keel as she tries to become the third straight British Columbia to win the Canadian Junior Girls Championship.

“I’ll just play my own game. I won’t worry about what other players are doing,” added Xiao. “Because someone from T20 could shoot a good number and win.”

Szeryk, 15, was unhappy with her third round. She started the day scorching hot pouring in four birdies in the first five holes and was 3 under par for the day through 14 holes before finishing with two bogeys and a double-bogey on No. 18.

“I feel like it was an awful ending. A lot of bad bounces and a lot of misreads. It was bad, just bad,” said Szeryk.

Szeryk’s older sister Maddie won this tournament in 2013, and the younger Szeryk has been in contact with Maddie this week as she tries to follow in her footsteps.

“I try to compete with my sister. She’s a big target for me, but I’m just trying to play my game,” said Szeryk. “She’ll be getting the lowdown on how today went for sure.”

13-year-old Emily Zhu climbed into third place at even par thanks to a 3-under-par 69 powered by an eagle on the par-5 fifth. Her round could have been even better if she’d avoided a few mistakes.

Zhu will join Xiao and Szeryk in final grouping tomorrow teeing off at 9:01 a.m.

Development Squad teammates Monet Chun and Mary Parsons are tied for fourth at 1 over par.

Chun, from Richmond Hill, Ont., carded her second consecutive under par round firing a 71 in round three to continue battling back from an opening-round 4-over-par 76.

“I was out there playing one shot at a time and being committed with my shots – it helped me a lot,” said Chun. “Tomorrow I’m going to play like today and not think about scores, and just take it one hole at a time.”

Parsons leads the field in birdies through 54 holes with 18 but has been unable to avoid mistakes. The Delta, B.C., native shot a 2-over-par 74 in round three after starting 4 over par in her first eight holes.

“The way that I fought back today is something to be proud of,” said Parsons. “But hopefully I won’t have to dig myself out of a hole again tomorrow.”